Styling an instant nod to its predecessor After an eight year wait since revealing the DC100 Concept in Frankfurt, a prolonged teaser campaign, numerous spy shots and leaked images as well as details, Land Rover, finally, revealed the all-new Defender on the first day of the German showpiece earlier today (10 September).

Claimed by Solihull to retain traditional Defender attributes combined with 21st century technology, the second official model to wear the iconic nomenclature, having been known as the 90 or 110 until 1990, carries the internal code L663 and uses a bespoke version of the new D7 platform dubbed D7x, the latter initial denoting ‘extreme’.

With its platform having been constructed mostly out of lightweight aluminium, Land Rover claims that the overall structure is three times stiffer than that of a usual body-on frame design, and that continues extreme test were carried out over 1.2 million kilometres in some of the world’s most hostile environments to assure durability. 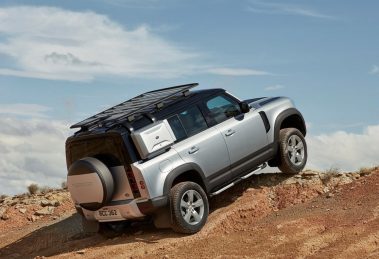 Designed by Chief Design Officer, Gerry McGovern, the Defender is an instant nod to its predecessor with the unmistakable boxy silhouette and short overhangs at the front and rear having been modernised to include features such as LED headlights and a forward facing camera. Cues however retained are the trademark Alpine roof windows and the spare wheel fixed to the tailgate.

As before, the Defender will be offered, for now, in 90 and 110-inch bodystyles with the latter arriving first and offering seating for five, though a 5+2 seating configuration will be available. The six-seat 90 is expected to be added later. 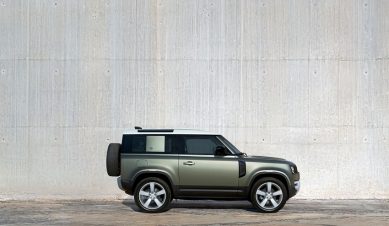 While it retains the famed Terrain Response 2 system and adds a two-speed low range transfer case, the Defender not only comes with the ClearSight Ground View display that debuted on the Evoque, but also air suspension that ups the ground clearance to 291 mm and results in the respective off-roading angles increasing to 38, 40 and 28 degrees. Optional is an Active Locking Rear Differential, Centre Slip and Centre and Rear Slip Limited differential.

Inside, the interior is all new with the dashboard housing a brand-new ten-inch touchscreen infotainment system called Pivi Pro that incorporates Apple CarPlay and Android Auto, and which also comes with 5G over-the-air software updates and Wi-Fi. The instrument cluster consists out of a 12.3-inch digital display, while a Heads-Up Display is also available.

In a departure from the previous Defender, the centre console now houses the controls for the climate control and the gear lever, while a new option is a third seats effectively forming a bench seat configuration at the front. For the 110, boot space is rated at 646-litres or up to 2 380-litres with all five seats down, while the 5+2 option offers slightly less at 464-litres to 2 233-litres. On the specification front, the Defender will go on sale with a choice of six trim levels; base, S, SE, HSE, X and First Edition with the additional option of four accessory packs; Urban, Country, Explorer and Adventure that comes with a series of bespoke exterior and interior trim pieces such as grained leather, suede cloth, woven textiles, walnut open pore or oak veneers and Kvadrat that consists out of wool and miko suede cloth. 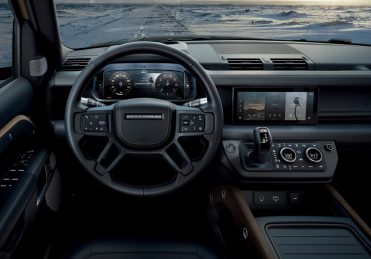 Up front, two engine options will initially be available; the D240 whose 2.0-litre Ingenium turbodiesel punches out 177kW/430Nm and the P400 MHEV that pairs a 3.0-litre supercharged straight-six petrol with a 48-volt mild-hybrid electric motor for a total system output of 294kW/550Nm.

Later on, the Defender will add a second four-cylinder oil-burner, the D200 whose 2.0-litre Ingenium pumps out 147kW/430Nm and a 3.0-litre straight-six diesel in the D300 that makes 221kW/650Nm. Capping the range off are two petrols; a 221kW/400Nm 2.0-litre turbocharged Ingenium four-cylinder in the P300 and the plug-in hybrid P400e that pairs the same engine with an electric motor for a combined output of 312kW/645Nm.

Land Rover South Africa has meanwhile confirmed that the Defender will go on sale in the first half of next year in 110 guise first with the 90 following later.