This is it: Toyota cracks open Yaris GR With the Tokyo Auto Salon having officially kicked-off, Toyota, after a prolonged teaser campaign with a series of images and numerous videos, has taken the wraps off of the highly awaited, four-wheel-drive Yaris GR.

The latest homologation model for the all-new Yaris’ entry into the World Rally Championship (WRC) next year, the GR, which does without the ‘4’ suffix attached to its name until now, is not only the result of Toyota’s in-house Gazoo Racing division, but also WRC team principal and four-times WRC champion Tommi Makinen’ Racing division in creating the first road-going rally derived model since the iconic Celica GT4.

Externally, the GR’s differences are immediately apparent in that it will be offered solely as a three-door model in a move similar to the previous generation Yaris GRMN. With most of its body having been made out of lightweight materials such as aluminium and carbon fibre, the GR also boasts a lowered by 91 mm roofline, wider wheel arches, a gloss black lower grille, model specific bodykit, black 18-inch alloy wheels wrapped in Dunlop SP Sport MAXX 050 rubber, dual exhaust outlets integrated into the diffuser and a gloss black boot spoiler. The most radical component however is to be found underneath where it rides on an effective hybrid platform made up of the standard Yaris’ GA-B architecture at the front and the bigger GA-C at the rear that has made the inclusion of the four-wheel-drive system possible.

An entirely new all-paw gripping system that retains the iconic GT-Four moniker, it does without a centre differential in order to save weight, and instead features a “high-response” coupling between the front and rear axles that alters the available power and torque.

In addition, the GR also comes with three driving modes; Normal, Sport and Track with the middle setting resulting in up to 70% of the amount twist going to the rear wheels only, while other changes include a double wishbone rear suspension, revised MacPherson struts at the front and upgraded brakes utilising a red painted, grooved four-piston caliper setup at the front and two at the rear with the respective discs measuring 356 mm and 297 mm. 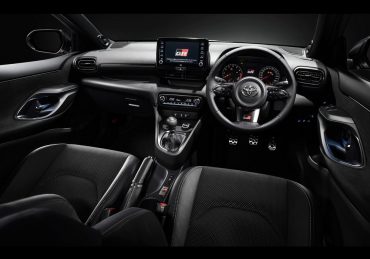 While no details of the GR’s interior specifications were revealed, what has been announced are the performance figures and outputs of the all-new 1.6-litre turbocharged three-cylinder engine claimed to the lightest of its kind in the world. Displacing 1 612 cc, the model bespoke 12-valve motor features a single-scroll turbocharger, a port machined intake, larger exhaust valves and a multi-jet oil cooling system that translates to a final output of 192kW/360Nm.

Up 37kW/110Nm on the 1.8-litre supercharged four-cylinder engine that powered GRMN, the 1 280 kg GR will reach 100 km/h from zero in a claimed 5.5 seconds and top out at 230 km/h. Like its predecessor, the sole transmission option is s six-speed manual.

Going on sale during in the second quarter of the year, the GR is, as yet, not been confirmed for the South African market.