Kept under wraps with little being known thus far, a report from the United Kingdom has revealed alleged details of the incoming eighth generation Volkswagen Golf GTI, GTI Cup and R.

Already making the rounds on various online platforms undergoing final testing, the extensive report by Car Magazine claims that all three derivatives will be offered with five doors only and the usual array of exterior and interior differences compared to the standard Golf that debuted at the end of last year.

It is however what lies underneath that has been the topic of much speculation with the publication claiming that the trio will once again be powered by the venerable 2.0-litre turbocharged petrol engine, albeit with the assistance of a 48-volt mild-hybrid system. Arriving first, the GTI, which was ruled out from getting the 48-volt mild-hybrid system on two consecutive occasions in February and September last year reportedly, will produce 173 kW instead of the outgoing Mk 7.5’s 169 kW, and have the option, in Europe, of a six-speed manual or seven-speed DSG transmission. As before, top speed will be limited to 250 km/h, but the expected 0-100 km/h could take 6.1 seconds.

A new designation, the GTI Cup is slated to replace the TCR and will take inspiration from the model that served as Volkswagen’s challenger in the hugely popular TCR touring car championship series taking place in Europe, Asia, Australia, the Middle East and North America. 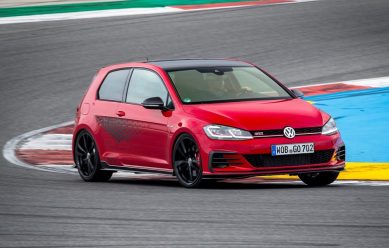 Despite the new name and electrical assistance, the Cup is expected to continue unchanged from the TCR in the power department, with the 2.0-litre motor set to once again produce 213kW/350Nm. Like the Mk 7.5 TCR, the Cup will be front-wheel-drive only and have a claimed top speed of up to 267 km/h.

At the sharp-end, the Golf R, reported as far back as 2018 as possibly producing 298 kW in an attempt to rival the Mercedes-AMG A45, will instead deliver 245 kW to all four wheels via the seven-speed DSG ‘box, and allegedly reach 100 km/h from standstill in 4.3 seconds. In spite of the power uptake of 17 kW over the Mk 7.5 R, torque will remain as is at 400 Nm.

Already confirmed for South Africa, the Golf will touch down with the GTI first followed by the ‘regular model powered by the carryover 1.4 TSI motor upgraded to 110 kW, with the R expected to follow later in the year. For the first time, no manual transmission will be offered as Volkswagen has confirmed that all models will the DSG ‘box a standard. An exact launch date is still to be confirmed.