The equivalent of the Japanese market SZ-R, the blown four-pot produces 190kW/400Nm that is sent to the rear wheels via an eight-speed automatic gearbox. A model that has been exclusive to Japan until now, Toyota has made its entry-level four-cylinder Supra available in Europe in order to “wider its customer base”.

Despite remaining outwardly unchanged from the existing six-cylinder model, the biggest change is of course to be found underneath the bonnet where the 3.0-litre B58 turbocharged motor shared with the BMW Z4 M40i has been replaced by the 2.0-litre turbocharged B48 engine used in the Z4 sDrive30i and the 330i. 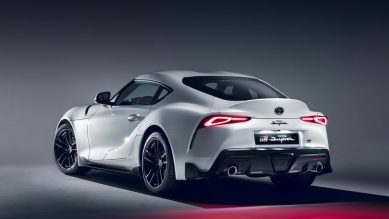 The equivalent of the Japanese market SZ-R, the blown four-pot produces 190kW/400Nm that is sent to the rear wheels via an eight-speed automatic gearbox. Top speed is once again limited to 250 km/h with the 0-100 km/h dash taking 5.2 seconds.

Tipping the scales at 100 kg less than the six-cylinder Supra, the 2.0-litre will go on sale in Europe in two trim levels; base and Premium with notable spec on the former consisting of an 8.8-inch touchscreen infotainment system, a four-speaker sound system, 18-inch alloy wheels, Pre-Crash with Autonomous Emergency Braking that incorporates Pedestrian and Cyclist Detection, sport seats trimmed in Alcantara, Lane Keep Assist, and Traffic Sign Recognition.

An optional Connect pack can be had and comes with satellite navigation, while the Sport boasts upgraded brakes, Adaptive Variable Suspension and an Active Differential. Building on the base, the Premium features a 12-speaker JBL sound system, black leather upholstery with electric and memory seats, a wireless smartphone charger, Heads-Up Display and “certain elements” from the Connect pack.

Bespoke to the 2.0-litre however is the special Fuji Speedway edition that comes with the Sport and Connect packs as standard, along with unique exterior fittings made up of matt black 19-inch alloy wheels, red mirror caps, a white metallic paint finish, red and black Alcantara upholstery and carbon fibre inlays. Production will be limited 200 units only.

Going on sale in March, the 2.0-litre Supra, at present, is a no-no for South Africa.