Volkswagen’s line-up of China only models will soon grow to include a shooting brake version of the Arteon called the CC Travel Edition.

The result of Wolfsburg’s long standing partnership with First Automotive Works (FAW), the images, leaked on the CocheSpias Facebook page, sees the estate-styled Travel Edition sporting a distinctive sloping rear facia, a lowered roofline and upwards moving shoulder line that expands all the way to the D-pillar.

Pictured on what appears to be a factory floor, the model in question boasts the R-Line styling pack and further adds black cladding around the wheel arches in a move similar to Audi’s allroad models, with roof rails and an integrated boot spoiler rounding the transformation off. 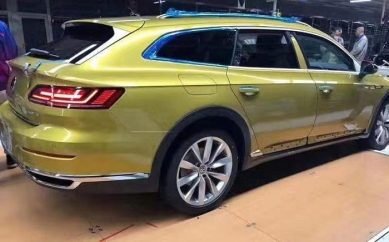 Retaining the nomenclature of the previous generation Passat CC instead of Arteon, the Travel Edition will go on sale in China later this year with a single petrol engine option, the 2.0 TSI in two states of tune; 137 kW and 162 kW with a seven-speed DSG being standard on both. Volkswagen’s 4Motion all-wheel-drive system will likely be offered as well, but only on flagship models.

As mentioned though, the Travel Edition will be limited to China despite motor1.com having reported in August last year that a Arteon Shooting Brake could become a reality.