Chevrolet’s upscale pick-up and SUV division, GMC, has taken the wraps off of its interpretation of the Tahoe and Suburban, the Yukon and Yukon XL.

Going on sale across North America later this year, both models join their respective Chevrolet siblings, as well as the Silverado and Sierra pick-ups, in moving from the GMT K2XX platform to the new GMT T1XX that makes extensive use of lightweight materials such as aluminium to reduce weight. 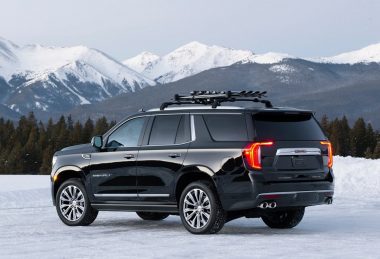 In spite of sporting the same dimensions as the Tahoe and Suburban, the Yukon and Yukon XL’s biggest difference are model bespoke aesthetics taken from the Sierra, namely a larger grille and C-shaped headlights with integrated daytime running LEDs, revised taillights and newly designed alloy wheels.

Reserved for the flagship Denali model are 22-inch alloys and the so-called Galvano grille chrome, while a new addition is the AT4 that follows in the wheel tracks of the Sierra and Acadia in being GMC’s third off-road focused model. Inside, the interior is largely carried over from the Tahoe and Suburban with notable tech such as a 15-inch colour Heads-Up Display, a ten-inch touchscreen infotainment system and an eight-inch digital instrument cluster plus an optional rear seat entertainment system made up of two 12.6-inch displays. Unique to the AT4 are Jet Black upholstery with Brandy inserts and leather seats with AT4 branded headrests, while the Denali comes with a choice of four colours, different seats and a new instrument cluster, as well as a four wood veneers and a HD surround view camera system.

In the States, the Yukon and Yukon XL will be offered in a choice of four trim levels; SLE, SLT, AT4 and Denali with the latter trio also receiving a new powered sliding centre console. Heated and cooled seats, a panoramic sunroof and a heated steering wheel are available on some models, although the entire range receives Autonomous Emergency Braking and Rear Pedestrian Detection as standard. 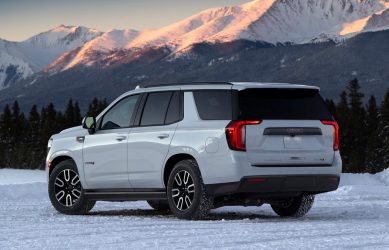 Like with their bowtie siblings, the Yukon and Yukon XL are new underneath in the shape of an independent rear suspension matched to the fourth generation Magnetic Ride Control dampers, the aforementioned Air Ride suspension that adjusts the ride by up to 101 mm and an electronic limited slip differential.

Up front, a choice of three engines will be available, all matched to a push-button operated 10-speed automatic gearbox co-developed with Ford with GMC’s new Active Response four-wheel-drive system being offered on all-paw gripping models. 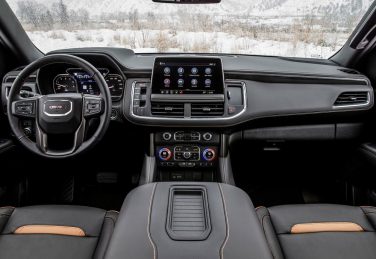 In terms of petrol power, buyers can opt for a 5.3-litre V8 that produces 265kW/519Nm or a 6.2-litre V8 outputting 313kW/623Nm. Returning for the first time in nearly two decades is a turbodiesel option, which comes in the form of the same 3.0 Duramax straight-six as the Silverado/Sierra and Tahoe/Suburban that punches out 206kW/624Nm.

Set to be built alongside the Tahoe/Suburban at GM’s Arlington Plant in Texas, pricing for the Yukon and Yukon XL will only be revealed closer to their respective launch dates, but as with their Chevrolet and pick-up siblings, will not be made available in right-hand-drive.