Passenger derivative is depicted with a panoramic glass-roof which Volkswagen claims will be “the largest in the segment”. Volkswagen has continued its teaser campaign of the all-new Caddy by releasing another batch of sketches ahead of the model’s confirmed unveiling next month.

As with the initial drawings revealed towards the end of last month, the images, this time of the MPV model and side profile of the panel van, shows the Caddy adopting Volkswagen’s latest design language with a prominent lower air intake and evolution of the current model’s headlight design.

Boasting a flatter and wider windscreen than the outgoing model, the passenger derivative is depicted with a panoramic glass-roof which Volkswagen claims will be “the largest in the segment”, while the side shot of the van all but confirms that the thin-strip vertical taillights will make it into the final product. 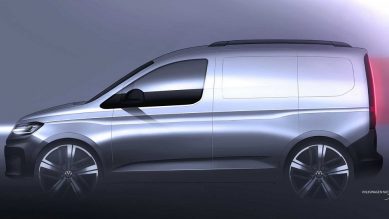 In an accompanying statement, Wolfsburg states that the Caddy will be equipped with “more driver assistance systems and a completely new level of digitalisation”, adding that it will “always be connected” in a trait similar to the Golf.

While no mechanical details were mentioned, the automaker has indicated that “no screw has been left untouched” and that the Caddy “will be completely new”, seemingly confirming that it will ride on the Golf’s updated MQB platform and possibly use the same assortment of TSI and TDI engines, as well as the 48-volt mild-hybrid eTSI motors.

Like the current model, the newcomer will be offered in commercial or Cargo guise, as well as the pictured MPV, and in two wheelbase configurations with drive set to be directed to the front wheels once again. Expect some markets however to have the option of Volkswagen’s 4Motion all-wheell-drive system.

Despite no exact date having been announced, the sighting of production models in numerous online spy shots since December has all but confirmed that an early or mid-February launch date might could be on the cards.