Speculation is that it could feature the new 2.5-litre petrol mill from the Optima that produces 140 kW in normally aspirated form and 210 kW in turbo-guise. A fresh batch of spy images showing the all-new Kia Sorento in full has gone viral mere hours before the Korean automaker’s release of an official teaser image of its own.

Very much conforming to the first pair of leaks last week, the latest clips by motor1.com sees the Sorento adopting a more aggressive frontal design derived from the Seltos in the shape of a concave Tiger Nose grille, slim headlights with integrated and inverted L-shaped daytime running LEDs, vertical faux air inlets on either side of the front bumper and a prominent shoulder line.

At the rear, the Sorento draws heavily from the Telluride with the same vertical LED lights, an integrated roof spoiler, faux satin silver diffuser and a bulging bootlid with an upside-down V-pattern above the number plate. 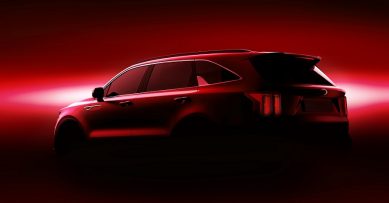 As indicated previously, the Sorento will come powered by a choice of petrol and turbodiesel engines, as well as a plug-in hybrid rumoured to produce 162 kW.

While details surrounding the powerunits are unknown, speculation is that it could feature the new 2.5-litre petrol mill from the Optima that produces 140 kW in normally aspirated form and 210 kW in turbo-guise, as well as the carryover, albeit revised, 2.0-litre and 2.2-litre oil-burners. Uncertain though is whether Kia will continue to offer the Sorento with a six-cylinder engine, which currently includes a 3.3 and 3.5-litre petrol.

In accordance with the teaser images, the Sorento will make its world debut on 3 March at the Geneva Motor Show and not on 17 February as initially stated.