Industry first OLED display is claimed to provide twice the pixel density of a 4K television. The darling of the R&B and hip-hop scenes, Cadillac has unveiled the fifth generation Escalade in North America that is claimed to “add a new dimension to the iconic luxury SUV”.

Essentially the third and final model of parent company General Motors’ new large SUVs to move to the all-new GMT T1XX platform, the others being the Chevrolet Tahoe/Suburban and GMC Yukon/Yukon XL, the Escalade sports the same dimensions as its higher-end siblings, but with significantly upgraded levels of kit and luxury. 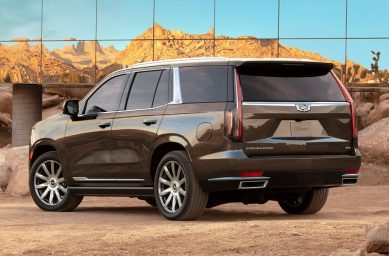 Sporting a bespoke frontal design in-line with Cadillac’s current design language, the Escalade’s interior is all new and aside from sharing some features with the Suburban High Country and Yukon XL Denali such as the dual 12.6-inch rear entertainment system, Forward Collision Alert and Front Pedestrian Braking and IntelliBeam automatic headlights, it boasts an industry first OLED display system.

Consisting out of a 14.2-inch digital instrument cluster, a 16.9-inch infotainment system, and a smaller 7.2-inch touch control panel, all in a curved design, the total 38-inch configuration is claimed to provide twice the pixel density of a 4K television. 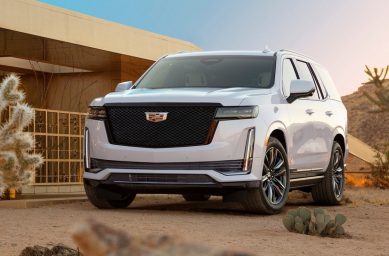 In addition to a new augmented reality satellite navigation system, Night Vision and Surround Vision that utilises four cameras to provide a two-megapixel view, the Escalade can also be specified with a 36-speaker AKG Studio Reference sound system as opposed to the standard 19-speaker system. On the safety front, the most significant addition is Cadillac’s Super Cruise autonomous cruise control system that now comes with automatic Land Change and a messaging system that alerts the driver when the system is not in use.

Along with the new independent rear suspension, changes underneath the Escalade’s skin includes a new electronic limited slip differential, improved Magnetic Ride Control system and the Air Ride Adaptive suspension that lowers the body by 51 mm to aid passenger entry. 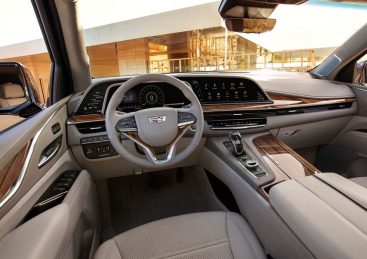 Carried over from its siblings are the engines, although reduced to two with the 5.3-litre V8 not being offered. It therefore leaves the 6.2-litre V8 that produces 313kW/623Nm and, for the first time in the Escalade’s 22 year history, a turbodiesel in the guise of the 3.0 Duramax straight-six that delivers 206kW/624Nm.

Available in four trim levels; Luxury, Premium, the new Sport grade and flagship Platinum and two bodystyle, standard and the long-wheelbase ESV, all models are equipped with all-wheel-drive that sends the respective engine’s amount of twist the road via the same Ford co-developed 10-speed automatic transmission as Tahoe/Suburban and Yukon/Yukon XL, albeit selected by a stubby gear lever as opposed to the push-buttons.

Going on sale across North America during the third quarter, of this year the Escalade will be built alongside the Tahoe/Suburban and Yukon/Yukon XL as GM’s Arlington Plant in Texas with no possibility of coming to South Africa at any stage.