Sorento sports an altogether more aggressive appearance with the front-end being a clear evolution of that of the the outgoing model. Continually teased in spite of leaking in several prior spy images since the end of January, Kia has now officially released pictures plus select details of the new Sorento ahead of its world debut at the Geneva Motor Show next month.

Effectively confirming what is already known, the Sorento sports an altogether more aggressive appearance with the front-end being a clear evolution of that of the the outgoing model in boasting Kia’s latest Tiger Nose grille, while the rear draws heavily from the North American Telluride in the shape of the light clusters and styled tailgate. 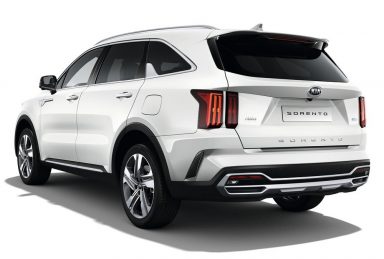 Boasting a longer wheelbase than the model it replaces, in spite of Kia not disclosing the actual dimensions, and with the A-pillar pushed back 30 mm, the interior, as indicated previously, is all new with pride of place going to a 10.25-inch touchscreen infotainment system flanked by an equally new 12.3-inch digital instrument cluster. No further details were divulged.

Despite revealing that the Sorento rides on an all-new platform, no technical details were announced, although a leaked document uncovered last week indicates a choice of two petrol engines; a normally aspirated 2.5 and a turbocharged 1.6-litre hybrid, as well as the current 2.2-litre CRDI turbodiesel that is likely to be updated in order to meet ever stringent emissions regulations. 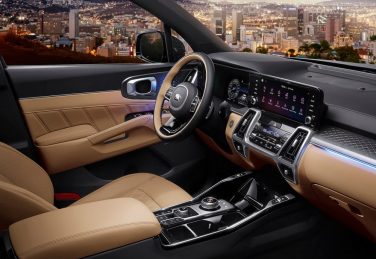 Transmission will consist out of a six-speed manual or six-speed automatic or six-speed automatic based on said document, with the oil-burner receiving an eight-speed dual-clutch as standard. Although unconfirmed, the Sorento is expected to be rear-wheel-drive for the first time with all-wheel-drive being offered on certain models. Outside its home market, a turbocharged version of the 2.5-litre petrol will reportedly be offered along with a smaller 2.0-litre forced-fed petrol and an entry-level oil-burner of the same displacement.

With just over two weeks remaining until its debut in Geneva, chances are that yet more information could emerge in the coming days.