Bacalar's sole exterior similarity with the Continental GT are the door handles in order to retain the keyless system. Claimed to be the “ultimate expression of two-seat, open-air luxury”, Bentley, and its long-time coachbuilder affiliate, Mulliner, have unveiled an ultra-exclusive roofless version of the Continental GT that was to have made its debut at the Geneva Motor Show.

Using the front facia from the EXP 100 GT Concept that bowed last year, the Mulliner Bacalar takes its name from the Laguna Bacalar lake region of Mexico’s Yucatan peninsula, with Crewe touting it as representing the “rarest two-door Bentley of the modern era”.

As mentioned, the Bacalar dispenses with the four-seat layout of the Continental GT and while based on the same platform, comes with a wider, by 20 mm, rear track while also featuring model specific head-and-taillights as well as slightly altered front and rear bumpers. 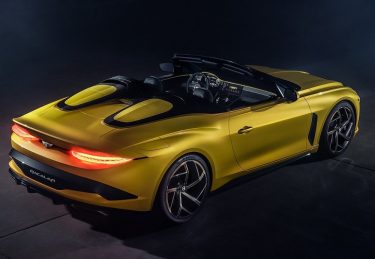 Made mostly out of carbon fibre with the doors, bonnet and the unique rear decklid being constructed out of lightweight aluminium, the Bacalar rides on 22-inch model-specific tri-finish alloy wheels with Bentley claiming that its sole exterior similarity with the Continental GT are the door handles in order to retain the keyless system.

The focus is however on the interior where the dashboard is made from a sustainable and preserved 5 000 year old wood called Riverwood that has been sourced from trees that have fallen naturally. In addition to the dash that also comes with a three millimetre chrome strip and a lower half finished in high gloss piano key black, pure woven wool is used on the floor and boot, while a  dark, anodised titanium finish is applied to the various switchgear.

Sporting a Beluga leather finish combined with natural wool and semi-gloss leather, yellow accents have been included to match the Yellow Flame exterior paint, with Alcantara inserts feature on the steering wheel and gear lever, the latter also having Dark Bronze detailing. 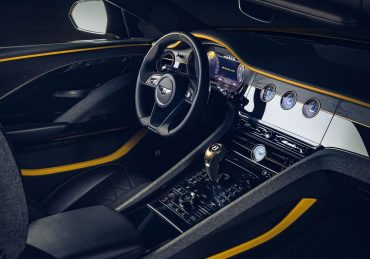 Further bespoke touches include a knurled pattern around the vents, on the steering wheel, around the climate control display and infotainment system, Black Titanium detailing, an inscribed clock face, leather straps for the seat releases and quilted stitch work Bentley claims consists out of 148 1999 individual stiches. Available as an option is a bespoke luggage set designed specifically for the Bacalar by Italian manufacturer Schedoni that can be stored in the integrated storage pods housed behind the rear seats.

Up front, the Bacalar uses an updated version of the Continental GT’s 6.0 TSI W12 that has been retuned to produce 485kW/900Nm. An eight-speed dual-clutch transmission drives all four wheels with the Bacalar also boasting the 48-volt Dynamic Ride and variable torque splitting systems. No performance figures were however divulged.

With a production run of just 12 models, the Bacalar will reportedly sport a price tag of £1.5-million (R29.5-million), but according to Bentley, all have already been accounted for.