By far the biggest highlight though is the interior. Leaked on social media in January without any disguise, the eagerly awaited, all-new W223 Mercedes-Benz S-Class has been spied once again, albeit this time from a closer proximity both inside and out.

Devoid of any badging and pictured in what appears to be scrapyard by the CocheSpias Instagram page, the exterior is very much an evolution over that of the outgoing W222 in the guise of a new grille, air inlets on either side of the bumper and a deep lower air intake.

The rear meanwhile draws heavily from the CLA and E-Class with a chrome strip featuring above the restyled taillights, while the bootlid itself appears more sculpted and in-tune with that of the former. 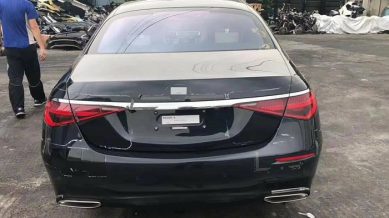 By far the biggest highlight though is the interior which, in typical S-Class fashion, is completely different from each previous generation. Until now seen from afar with a digital instrument cluster and expansive MBUX infotainment system, the leaked image shows the entire centre console being taken-up by the latter in a tablet-style design derived from the EQS concept.

While the mentioned horizontal digital instrument display has indeed been kept, the rest is brand new with the central facia of the two-tier dashboard being dominated by four GLE-style air vents, and behind the cluster, a somewhat curiously looking slanted storage area which, according to carscoops.com, has to do with the Heads-Up Display. The lower half of the dash meanwhile is completely flush with the only anomalies being the starter button to the left of the MBUX and the vertical climate control outlets on the extreme right.

Capping the interior off is the same three-spoke multi-function steering wheel that debuted with the facelift E-Class and the optional rear seat entertainment unit complete with dual screens, individual climate control panel and a central armrest. As is already known, the S-Class will ride on the three-pointed star’s MRA platform also used by the AMG GT 4-Door and come powered by a range of petrol, diesel and mild-hybrid engines, with a plug-in hybrid and full electric powerunits likely to join at some stage.

According to carscoops, the S-Class will make its official world debut in September before going on-sale in Europe two months later. Expect it however to touch down in South Africa only in 2021.