The updates are likely to become available on the Thai-sourced XP150 sold in South Africa.

Derived from the Yaris ATIV, itself a development of the third generation Vios that bowed seven years ago as the first model to carry the XP150 internal designation, a series of registration documents have emerged in South America showing what appears to be a second facelift for Toyota’s mainly Asian and emerging market Yaris.

The recipient of an initial refresh in 2017, the images obtained by motor1.com Brazil, via Argentinian publication, parabrisas.com, sees the Yaris receiving a restyled front bumper with new vertical faux air inlets, more aggrieve headlight clusters, an X-shaped lower air intake mirroring that, to an extent, of certain Lexus models, and new fog lights. The rear facia meanwhile has remained unaltered with no images of interior being revealed either. 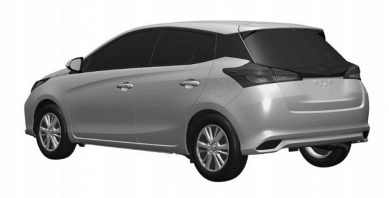 Based on the report, the updated Yaris could debut in South America either later this year or in early 2021 with power set to come from the existing range of engines, made-up of a 1.3 or 1.5-litre petrol paired to either a five-speed manual gearbox or a CVT.

As it stands, the updates are likely to become available on the Thai-sourced XP150 sold in South Africa as the all-new European and Japanese market Yaris could prove to be too expensive for the local market, a factor that allegedly led to the previous XP130 generation being discontinued in favour of the XP150 two years ago.