After a much reported false start last week, Lexus, in the early hours of Tuesday morning (16 June), unveiled the heavily updated IS in what is likely to be the now seven year old, third generation model’s final extensive update.

More dramatic than any past iteration, the internally named XE30 boasts a completely new front-end, partially inspired by that of the UX, while the side view takes elements from the RC and the rear more than a few nods from the LS.

Styled with a unique take on the brand’s trademark Spindle Grille, the IS receives slimmer adaptive LED headlights, new rocker panels, standard 18-inch alloy wheels and at the rear, a new bootlid and, as indicated by the pair of teaser images, sculpted taillights with a central bar that runs the entire width of the facia. 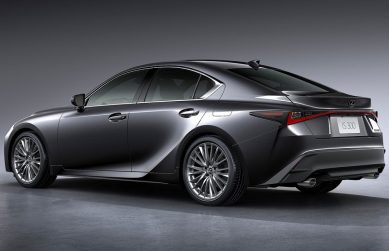 As on the outside, the IS’s interior has been updated, but more subtly with pride of place going to a new eight-inch or 10.3-inch infotainment system with integrated Apple CarPlay and Android Auto. On models fitted with the latter, a 17-speaker Mark Levinson sound system outputting 1 800-watts can be had, with the updates being rounded off by a new dual-zone climate control panel, push-button start and a standard NuLuxe faux leather upholstery finish. 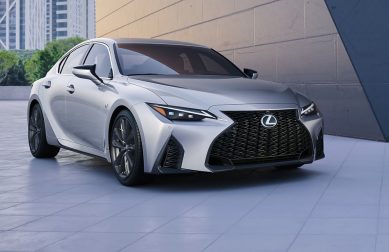 With an all-new platform, co-developed with Mazda, set to underpin the fourth generation IS out in 2026, the existing New N platform has been tweaked to measure 30 mm longer overall, 30 mm wider and five millimetres taller than before. The 2.8 m long wheelbase is unchanged. In addition, the IS also comes with lighter new coil springs, forged aluminium suspension A-arms, new swing-valve shock absorbers and a new suspension stabiliser bar. 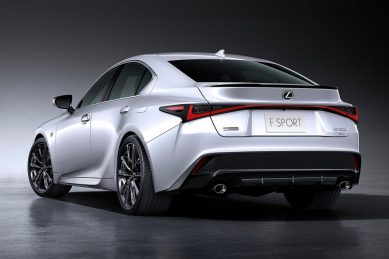 Building on these, the F Sport receives a Torsen limited slip differential while the Dynamic Handling Pack adds a reworked Adaptive Variable Suspension and a Sport+ setting on the drive mode selector.

As initially expected, no changes have taken place underneath the bonnet where the US-spec IS will have a choice of three engines; the IS 300 whose 2.0-litre turbo pushes out 180kW/350Nm, the all-wheel-drive IS 300 which swaps the blown four-pot for a 190kW/320Nm normally aspirated 3.5-litre V6, and the IS 350 which comes with the same V6, but with output raised to 232kW/380Nm. 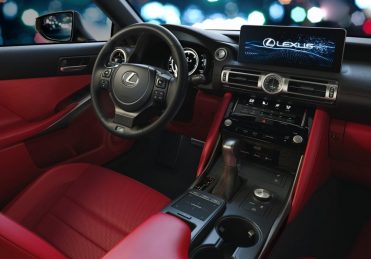 In the US, sales of the IS will commence later this year with pricing still to be announced. Toyota South Africa has meanwhile confirmed availability of the IS from next year with three models set to be offered, likely to be the IS 300, the IS 350 F Sport and the IS 300h whose normally aspirated 2.5-litre engine serves up 164 kW when combined with the electric motor. Price will only be revealed closer to the launch date.