Newcomer signals the biggest departure of any previous generation both inside and out. As evident by the mentioned teasers, the Tucson incorporates a slightly different take on Hyundai’s Sensual Sportiness design language, by boasting a dramatic take on the now obligatory jewelled grille with most of the overall look being derived from the Vision T concept shown in Los Angeles last year.

Accompanying the grille, the Tucson, like the Kona and Santa Fe, adopts a split headlight design, but with emphasis placed on the main LED beams integrated into the grille in a upside down L-shape the Korean marque has dubbed Parametric Hidden Lights. Squared off at the rear with a stockier appearance than any previous generation, the newcomer assumes a coupe-like profile in addition to an integrated bootlid spoiler, claw-like LED light clusters with a full width central light strip, a satin silver skidplate, faux inlets on either side of the rbumper and dual exhaust outlets.

In total, buyers have a choice of six colours; Polar White, Phantom Black, Silky Bronze, Dark Knight, Sunset Red, Engine Red and three new hues; Teal, Shimmering Silver and Amazon Grey. Depending on the finish, a Dark Knight or Phantom Black roof can be had as an option. 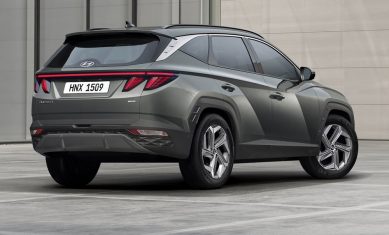 Previously seen as a sketch, the Tucson’s interior is a similar departure from its predecessors with the layout and design adopting a minimalist approach Hyundai has dubbed Interspace inspired by a “neatly organised room where everyday concerns disappear”. Decked-out in a choice of three fabric or leather colours; black, teal and black/Moss Grey, the centre facia takes on an appearance similar to certain Jaguar models in that the 10.25-inch touchscreen infotainment system has been integrated and the facia equipped with touch sensitive buttons devoid of any knobs or dials for the audio or climate control systems.

On most models, a thin 10.25-inch digital instrument cluster comes fitted with all receiving a retro three-spoke steering wheel, a flush surface transmission tunnel that boasts a button operated gear selector setup similar to the Palisade on automatic models, twin cupholders and a button activated handbrake.

In terms of dimensions, the Tucson gains on its predecessor on all fronts with the overall length being 20 mm longer at 4 500 mm and the wheelbase by 10 mm for a total of 2 680 mm. The overall width has been widened by 15 mm to 1 865 mm and the height increased by five millimetres to 1 650 mm. 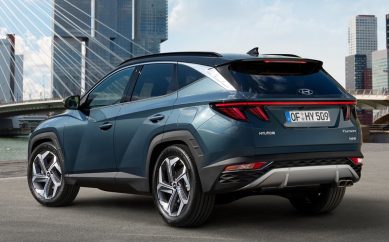 On the equipment side, and depending on the trim level, the Tucson gets a wireless smartphone charger, a new multi-mode climate control system, 64 colour ambient lighting system with ten brightness levels, dual USB ports, remote folding rear seats and a Krell sound system.

Riding on 17, 18 or 19-inch alloy wheels and fitted with a new steering rack mounted electric motor for the power steering as well as a new electronically controlled adaptive suspension with two modes; Eco and Normal, the Tucson, in Europe, will have a choice of two conventional engines, two mild-hybrids and one hybrid with a plug-in hybrid arriving at a later stage.

On the ‘conventional’ powerunit side, the Tucson employs Hyundai’s 1.6 T-GDI Smartstream petrol rated at 110 kW or the 1.6 CRDI Smartstream turbodiesel rated at 85 kW. Both are paired to a six-speed manual gearbox with the latter being front-wheel-drive only while the former can be had with the HTRAC four-wheel-drive system. Optional on both though is the new Intelligent Manual Transmission (iMT) still with six ratios, but with an electronic clutch. 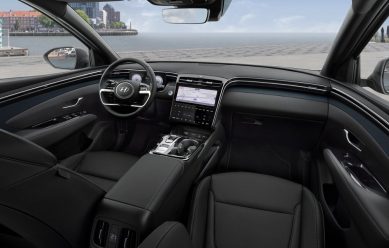 When selected with the 48-volt mild-hybrid system, two versions of the 1.6 T-GDI are offered; 110 kW sent to the front wheels only and 132 kW delivered to the fronts or all four with the HTRC system receiving three modes; Mud, Snow and Sand in addition to the four standard settings; Eco, Smart, Comfort and Sport that are not available on the manual.

Like the Santa Fe, the full-hybrid Tucson pairs the T-GDI with a 44.2 kWh electric motor for a total system output of 162 kW, while the plug-in hybrid will bear the sporty N Line moniker and produce 195 kW when its debuts next year. Although details on the N Line will be announced later, the hybrid is outfitted with a six-speed automatic gearbox and with the choice of either front or four-wheel-drive. Unsurprisingly, no mention was made of the performance Tucson N.

Going on sale in its home market from this month, the Tucson is poised to arrive on local shores next year with final specification and pricing to be confirmed.

Revealed: South Africa’s top 10 most popular cars for under R50k
42 mins ago
42 mins ago

Revealed: South Africa’s top 10 most popular cars for under R50k
42 mins ago
42 mins ago