This is it: All-new Ford Ranger spied on test for the first time With its eagerly awaited debut getting closer, the all-new Ford Ranger has been spied undergoing testing in North America for the first time.

Confirmed to provide the foundation for the next generation Volkswagen Amarok, which will be build alongside it at the Silverton Plant outside Pretoria next year, the images published by motoring.com.au of the internally known P703 shows a silhouette similar to the current T6, but as indicated by the disguise on the front facia, a flatter F-150 inspired look in the shape of the grille contrasted by the design of the headlights. Less easy to decipher is the rear thanks to the thick layers of black-and-white wrapping. No interior images were divulged.

Set to be called the T7, the Blue Oval will once again offer two versions with the global model poised to continue with the current 2.0-litre single and bi-turbodiesel Panther engine, but not the 2.2 or 3.2 Duratorq TDCi Puma engines the T6 debuted with almost a decade ago.

Instead, and if rumours that emerged in 2019 are to be believed, it will get the 3.0-litre Powerstroke turbodiesel V6 that produces 186kW/597Nm in the F-150. Reserved for the States is a plug-in hybrid version of that market’s 2.3 EcoBoost petrol and potentially the twin-turbocharged 298 kW 3.0 EcoBoost V6 from the Explorer ST that will power the Raptor.

Outside of the US, the global Raptor will continue to be offered with diesel power, albeit with the mentioned V6 and not the 2.0-litre which, in bi-turbo form, will take the position of the soon-to-be-shelved five-cylinder 3.2. Regardless of the engine though, the only transmission currently mentioned is the General Motors co-developed ten-speed automatic. 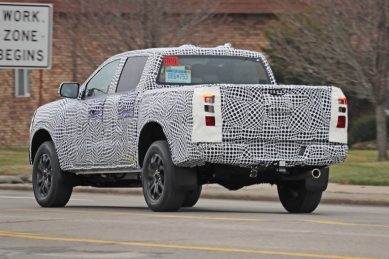 What remains to be seen though is how the Ranger will stack-up against to the Amarok with current rumours suggesting Wolfsburg will shelve its engines for the Blue Oval’s, meaning the end of the 190 kW 3.0 TDI that become available last year, while also introducing a performance R model likely to be derived from the Raptor.

In an interview with carexpert.com.au last month, Volkswagen Australia Managing Director, Michael Bartsch, said key lessons had been learned from the criticism lobbed at the now discontinued Nissan Navara-based Mercedes-Benz X-Class, adding that the Ranger will be “distinctly Ford” and the Amarok “distinctly Volkswagen instead of being reskinned badge engineered models.

“There were certainly lessons to be learned from the Mercedes and Nissan Navara experience, and that was used as an example of the importance of making sure that things weren’t just badge-engineered, that they had substance,” Bartsch said.

He also remarked to carsguide.com.au that, “we will not make the same mistake Mercedes made with the X-Class and Navara. We made it very clear [to Ford] what the consumer expectation would be. We move forward with full confidence that there will be a Ford product and a Volkswagen product”.

Given the timing of the Ranger images, expect more and possibly even final details to emerge over the coming months.