WATCH: Not pig but bird as Ford confirms Raptor for Bronco

The power is expected to come from a twin-turbocharged 3.0 EcoBoost V6 pumping out 298kW/562Nm. 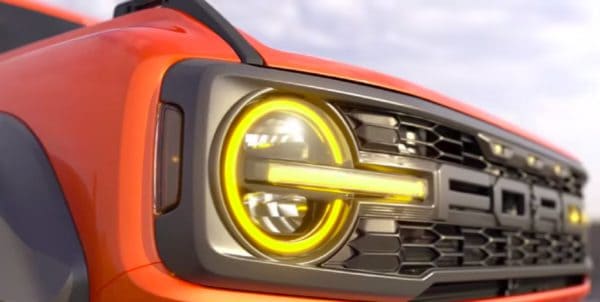 A screengrab of the teaser video showing the new Ford Bronco Raptor.

Ford has broken its silence on the performance, off-road focused version of the Bronco by confirming the newcomer will indeed be called the Bronco Raptor and not Warthog as previously stated.

In a short teaser video posted on its YouTube page, the Blue Ovals, aside from confirming the nomenclature, also provided a brief first glimpse by way of the front facia that sports the block letter FORD grille, plastic wheel arch cladding and a new colour called Code Orange.

According to a report by the FordAuthority online forum, the Bronco Raptor will benefit from the same Fox Racing dampers and shocks as the Ranger Raptor and F-150 Raptor, while riding on model specific 17-inch alloy wheels wrapped in BF Goodrich all-terrain tyres.

As indicated by ongoing spy shots, and as per the mentioned report, the Bronco Raptor will feature a wider front and rear track, better ground clearance than the standard model’s Sasquatch package and potentially, although still to be confirmed, the Terrain Management system complete with Baja mode.

Set to be revealed next year with an exact date to be confirmed, the Bronco Raptor is expected to drop the regular model’s top-tier 2.7 EcoBoost V6 for the 298kW/562Nm twin-turbo 3.0 EcoBoost V6 used in the Explorer ST.

An engine also mulled for the incoming US-spec Ranger Raptor, the twin-blown bent-six petrol will, once again, be paired to General Motors co-developed ten-speed automatic gearbox with a low range transfer being included.

While more details are set to emerge over the coming weeks and months, the Bronco Raptor, like the standard model, won’t be offered in South Africa as no plans are in place to offer it with right-hand-drive.