However, it wasn't all plain sailing stage wise. 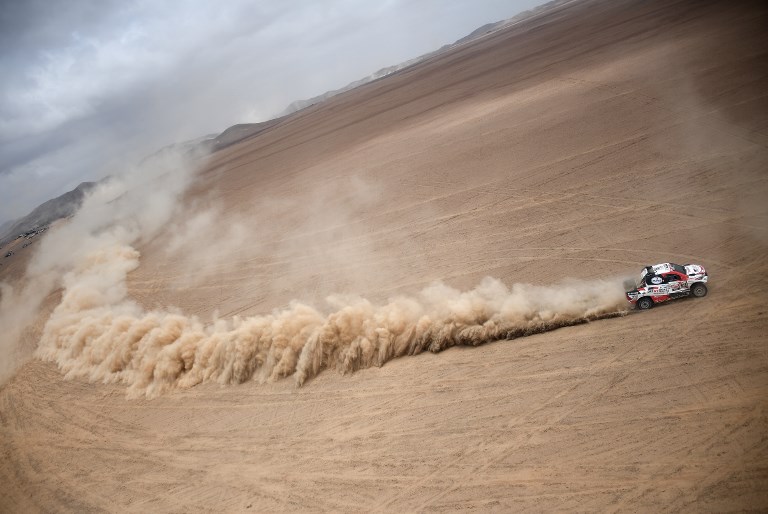 Toyota's driver Nasser Al-Attiyah of Qatar and French co-driver Mathieu Baumel compete in the Dakar Rally Stage 4 between Arequipa and Tacna, in Peru, on January 10, 2019. (Photo by Franck FIFE / AFP)
South Africa’s Toyota Gazoo Racing team entrants Nasser Al Attiyah and navigator Mathieu Baumel consolidated their overall Dakar Rally lead after a Stage 4 win in Tacna, Peru, on Thursday night (SA time).
But this Marathon Stage of the rally brought mixed results for Toyota despite the pair extending their lead to 8:55 minutes by winning the 405km-long stage.
There was heartache for Dutch driver Bernhard ten Brinke and navigator Xavier Panseri, after they lost 02:56:02 on the day while more time was lost by South African Giniel de Villiers and Dirk von Zitzewitz.
For Al Attiyah / Baumel, the day could hardly have gone better. The pair started as the second car on the road, behind the winner of Stage 3, Stephane Peterhansel (MINI).
The Toyota crew pushed throughout the stage, steadily increasing their lead to finish 01:52 clear of the MINI crew.
Stage 4 was the first part of the marathon section of this year’s Dakar Rally, which means that the crews have no technical support at the bivouac in Tacna.
Any repairs have to be done by the crews themselves, using only tools and equipment they carried with them in the car.
For Al Attiyah / Baumel, their clean run on Stage 4 meant an easy evening in Tacna, before preparing for the return leg back to Arequipa for Stage 5.
It wasn’t plain sailing for the entire team, however, as Dutch driver Ten Brinke and Panseri lost time near the start of the stage when they struck a rock in thick dust, severely damaging the left rear wheel of their car.
They stopped to make running repairs, and eventually got going again, but they lost nearly three hours in the process.
Teammates De Villiers and Von Zitzewitz, who started the day as the 25th car on the road, stopped to assist the stricken #309, but after working for more than an hour to remove the damaged parts, they left Ten Brinke / Panseri to complete the repairs, and continued with the stage.
They posted competitive times for the rest of the special, but lost more time in the overall standings due to their stop.
Stage 5 will see the crews return to the bivouac at Arequipa on a near-reciprocal route, before taking a much-deserved break on Saturday.
After the rest day, the race heads back towards the Peruvian capital of Lima, where the 41st Dakar Rally comes to a close on January 17.