The left lane of the Flying Saucer Interchange has been closed as a precautionary measure. 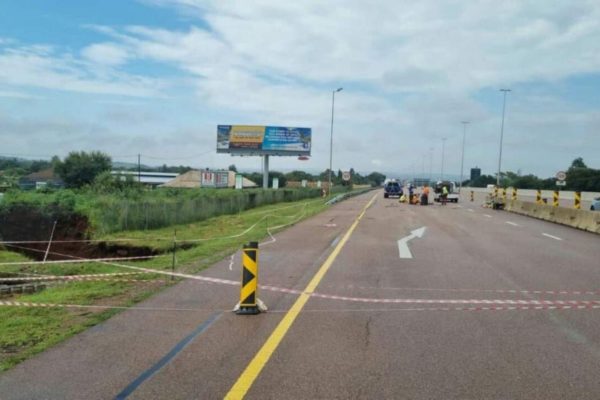 Traffic being diverted on Sunday after reports of a 'sinkhole' along the N1 south in Centurion emerged. Photo: Twitter/@firstgroup_FRT

Traffic is moving at a snail’s pace on Monday morning, following reports of serious soil erosion along the N1 south before Botha Avenue in Centurion.

On Sunday, reports began to emerge that parts of the highway, notably just past the R21 at the Flying Saucer Interchange, were being closed due to a “massive sinkhole”.

The South African National Roads Agency (Sanral) confirmed that a team of engineers, geotechnical experts and road maintenance workers were assessing the situation.

Sanral northern region manager Progress Hlahla said the left lane of the highway has been closed as a precautionary measure, and that road users would be kept informed of any developments.

ALSO READ: PICS: Driver injured after driving into sinkhole with no barriers around it

It is not yet known how long repairs will take, or when the lane will be reopened.

A number of vehicles were trapped or swept away in the Tshwane area over the weekend.

For 10 years, sinkholes in the Centurion area have been a constant source of frustration for residents and motorists.

From forming on main roads to outside people’s homes, sinkholes have wreaked havoc with water supply and traffic in the area.

In March last year, Pretoria Rekord reported there were at least 36 singles in the area, including near Centurion High School and Unitas Hospital.

Tshwane roads and transport department chairperson Elmarie Linde told the publication that R10 million was allocated to repairing sinkholes in Centurion, and that more money was anticipated to be allocated later that year.

Recent consistent and heavy rainfall has not helped the situation.

Sinkholes are prevalent in Centurion due to the large deposits of dolomite in the area.

And due to the porous nature of dolomite, when it gets wet, it “acts like a sponge and starts to crumble”.