After standing out as the country's top track and field athlete this season, Johan Cronje hopes the 2013 campaign will be the turning point of his lengthy career. 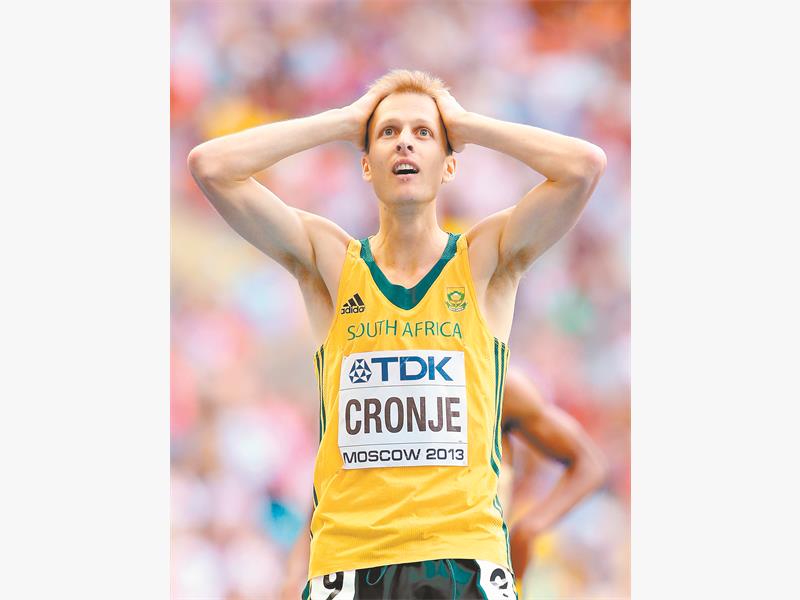 The 31-year-old middle distance runner smashed the SA 1 500m record twice this season, clocking an impressive 3:31.93 in Rieti in September, and snatched a surprise bronze medal at the IAAF World Championships in Moscow in August.

“A lot happened in the last 10 years that prohibited me from having a season like this,” Cronje said yesterday.

“I’m happy there were none of those problems, or niggling injuries, and everything fell into place.”

Cronje was the star of a relatively disappointing track and field season, with conflict and in-fighting at Athletics SA (ASA) dominating the headlines, but there were some breakthrough performances that signalled a bright future for the sport.

Rising sprint sensation Anaso Jobodwana took another step forward in his promising career, with the 21-year-old speedster narrowly missing the national records in both short sprints.

Jobodwana finished sixth in the men’s 200m final at the global spectacle and reached the semifinals of the flagship 100m event.

He also made history at the World Student Games in Kazan in July, becoming the first man to win the sprint double at the biennial event since Italian Pietro Mennea won 100m and 200m gold at the 1975 edition in Rome.

The country’s athletics contingent was almost prevented from taking part in the Games after ASA was suspended by the SA Sports Confederation and Olympic Committee (Sascoc), but University Sport SA (USSA) withdrew its Sascoc membership on the eve of the event to open the door.

The athletics team went on to scoop 11 of the nation’s 14 medals, spearheaded by distance runner Stephen Mokoka who grabbed three medals.

Meanwhile, the men’s long jump provided the most depth of all track and field disciplines this season.

Khotso Mokoena finished seventh in a closely-fought final at the world championships, and while Zarck Visser was eliminated in the qualifying round, he set a personal best of 8.32m in Zurich in August to end the season ranked fifth in the world.

Decathlete Willem Coertzen again proved to be the country’s most versatile athlete, bettering his own SA record when he finished ninth in Moscow with 8 343 points.

Among the women, Sunette Viljoen was by far the country’s top athlete in the 2013 campaign.

Viljoen was disappointed with her sixth place in Moscow but she was the only SA woman to reach a final at the biennial spectacle.

She ended the year ranked sixth in the world with a season’s best of 64.51m.

Two-lap specialist Caster Semenya failed in a late bid to qualify for the global championships, targeting her third straight medal, after recovering from a knee injury that resulted in surgery.

Semenya, however, produced a season’s best of 1:58.92 in Rieti in September and she will hope to be back to her best in the new year.