The victims were at a pizza outlet when they were approached by an unknown man and woman. 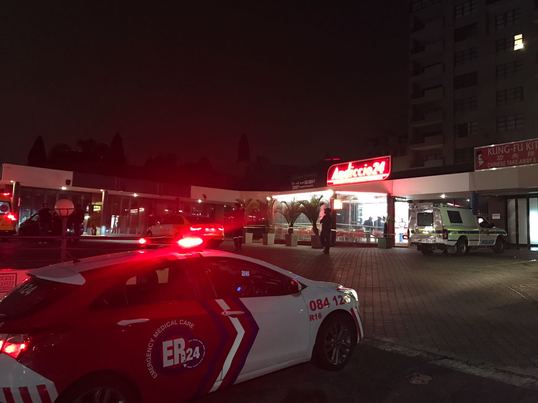 The scene outside Andiccio24 in Sandton. Photo: Supplied.

Four suspects have been arrested following a shooting that left one person dead and another critically injured in Sandton early on Monday.

Sandton police spokesperson Constable David Mothapo confirmed the incident, saying the victims were at a pizza outlet when they were approached by an unknown man and woman. The male suspect started an argument with the victim and produced a firearm and started shooting.

Mothapo said an argument led to the fatal shooting. The suspects, two males and two females fled the scene and were later arrested in Alexandra. Two firearms were recovered, the Sandton Chronicle reports.

According to Werner Vermaak from ER24, paramedics were called to the scene early this morning. When they arrived, they found that two patients were removed privately to Mediclinic Morningside.

“Our paramedics went to the hospital to assist. One person was found with a gunshot wound to his chest. Despite the efforts of the doctors and paramedics, the man later succumbed to his injuries.

“A second man was found with a gunshot wound to his head. He was in a critical condition and placed on life support. He was transported by ER24 from Mediclinic to a hospital in Johannesburg for further care.”

Mothapo said the suspects would be charged with murder and attempted murder.