'My lovable dog is in pain and distress and has become skittish and scared.' 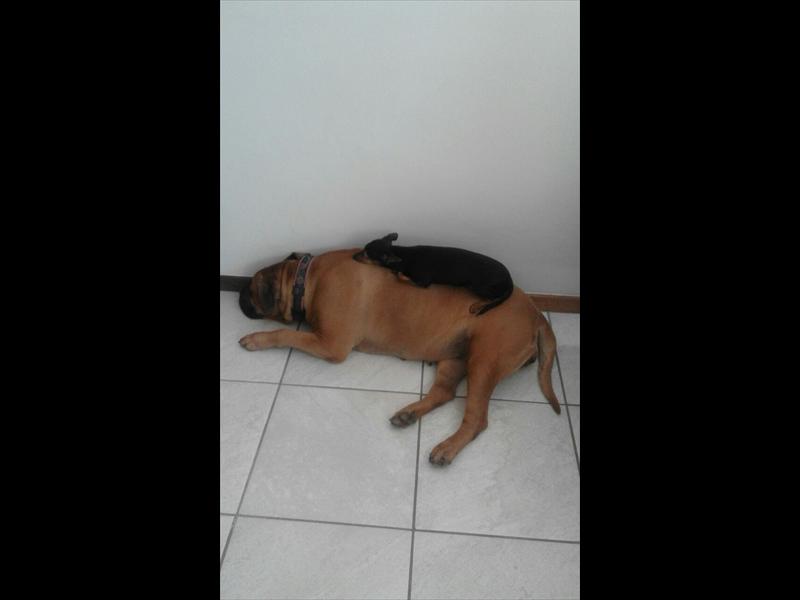 Kila and his sister, Missy, taking a nap.

An Eldoraigne resident in Pretoria said she is afraid to leave her dog outside after the animal was shot with a pellet gun.

The woman, who asked not to be named, said her five-year-old boerboel Kila had been shot six times since 2015, Rekord Centurion reported.

The most recent shooting took place on Wednesday.

The dog owner said when she got home after she had fetched her child from school, she noticed Kila swaying her head profusely.

On closer inspection, she found a wound on Kila’s forehead similar to the previous wounds she had sustained.

“Whoever is doing this shot her between the eyes,” she said.

“My lovable dog is in pain and distress and has become skittish and scared.”

The woman said the size of the wounds were always the same and she was convinced someone in her complex was harming her dog.

She said she believed the culprit waited until she left the house and then took aim at Kila.

“We have six-foot walls, a steel gate with openings and both my dogs are always inside the property,” she said.

“They stay inside every day and at night. Whenever they bark, I call them inside so as not to disturb the neighbours.”

The woman said she had reported the shootings to the security staff and the manager of the residential complex over the past two years, but said the shooter was “sly”.

“I have contacted the SPCA, who were very helpful.

“Now we have to wait and see what will happen in the next week or so.”

She said she believed the person committing this crime thought they could get away with it.

“Kila is a very relaxed dog and gets along very well with people. She is not bothering anyone,” she said.