Andre Olivier and Orazio Cremona got South Africa's campaign off to a superb start yesterday in the morning session on day one of the IAAF World Indoor Championships in Sopot, Poland. 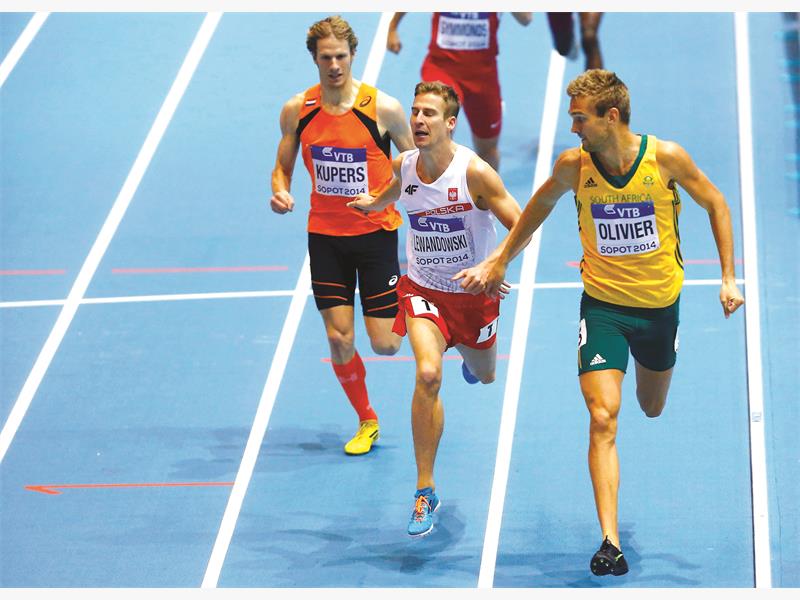 SOLID. Andre Olivier, right, holds off Thijmen Kupers of the Netherlands and Poland's Marcin Lewandowski in the 800m heat during the World Indoor Championships in Sopot, Poland yesterday. Picture: Reuters.

Olivier ran a well-judged tactical race to win his 800m heat in 1:46.18, taking the lead at the bell and holding off a late burst from Marcin Lewandowski of Poland.

He will line up in the four-lap final tomorrow evening.

Lewandowski’s team-mate, Adam Kszczot, was the fastest athlete in the first round, winning his heat in 1:45.76, and world outdoor champion Mohammed Aman of Ethiopia, the only man faster than Olivier this season, won the other heat in 1:46.73.

Cremona shone on his indoor debut, taking seventh place in the qualifying round of the men’s shot put to book his place in the final, which was scheduled to be held late last night.

His first-round heave of 20.28m was just 27 centimetres short of his outdoor personal best set in Donnas, Italy, last season.

Compatriot Jaco Engelbrecht was well off his best, and he was eliminated after a sub-standard effort of 17.59m.

David Storl of Germany produced the furthest distance of the first-round qualifiers with a best of 21.24m, nearly half a metre clear of the rest of the field.

Vlasic failed with three attempts at 1.95m and narrowly squeezed through to the final as the eighth best of the qualifiers.

Anita Hinriksdottir of Iceland equalled the women’s world junior indoor 800m record of 2:01.03, finishing second in her heat, but she was later disqualified for a lane violation.

South African long jumper Zarck Visser was set to compete in the qualifying round of his event late last night, while Elroy Gelant was scheduled to line up in the men’s 3 000m heats.

Sprinter Carina Horn starts her campaign in the first round of the women’s 60m sprint this morning.