Pensioner robbed and raped at Sassa

The elderly woman wants her rapist to be arrested before he hurts other senior citizens or anybody else. 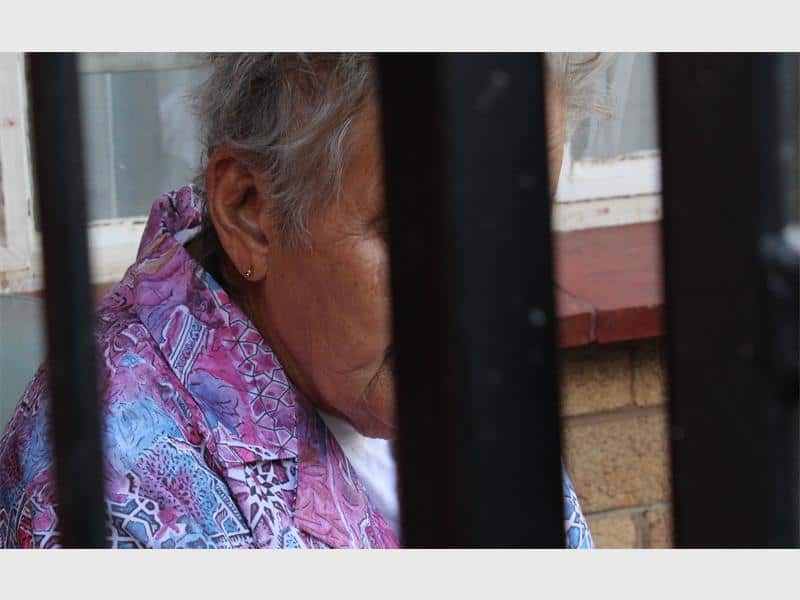 A 66-year-old woman beaten, robbed and then raped at the SASSA building. Photo: Lucky Thusi.

A 66-year-old woman has shared her painful ordeal of the day she was beaten, raped and robbed of her pension money by a man who attacked her at the Sassa building in Johannesburg on Monday, March 6, Southern Courier reports.

In a very emotional and delicate interview with the Courier, the elderly woman said she had gone to the offices to renew her card, but the lift that was supposed to take her up took her down to the basement instead.

“When the lift stopped, I was suddenly attacked by this man who applied pressure to my eyes, blinding me, then he started beating me … he covered my mouth, raped me and threw my bag aside,” said the traumatised pensioner.

The woman, who lives by herself, said she is not in touch with her children and would rather they did not find out about what happened. When asked if she would be willing to go through counselling, she explained that she did not even want to be around a lot of people at the moment.

She said the man could be someone who knew the place well, because she noticed how he quickly closed a gate in the area where she said she was attacked.

“After the attack I was only left with my bus fare. I went upstairs to speak to a man who I was told was a supervisor, and he said to me that he was sorry. I was so confused when I went out of the Sassa offices.

“I hope they catch him so that he doesn’t hurt anyone else. Why don’t people just leave us old people alone?” she asked.

Details of the attack are a bit sketchy, as the victim is still traumatised. Also, she could even have been referring to the underground parking when she said “basement”.

Moffat View police have confirmed that a case of rape was indeed opened and that an elderly woman was raped at the Sassa building in Johannesburg.

Moffat View CPF Sector Three members and police officers donated money and delivered bags of food to the elderly woman’s home. They are asking more people who wish to help to do so, as she said she would love a fridge to keep her meat cold and a TV, even if it is a very old one.

The Sassa spokesperson has been contacted and promised to comment, admitting that she was only made aware of the incident by the Courier’s enquiries.

Sassa Gauteng spokesperson Nandi Mosia’s said: “Sassa condemns this alleged barbaric act that is said to have taken place within the premises. Sassa has put interventions in place to support the victim. An appointment with a social worker from the regional department of social development has been secured, where the victim will be provided with counselling.”

In addition, he said: “The building in which Sassa is leasing space in 1 De Villiers Street has security at reception point, as well as near the ATM for general access. There is no physical security at the basement, but there are surveillance cameras.

Mosia said: “There are surveillance cameras in the building and in the basement, and access to the basement requires no cards.”

Diepkloof electricity saga: 'Eskom lied to us' – Residents fear for their safety
51 mins ago
51 mins ago

Diepkloof electricity saga: 'Eskom lied to us' – Residents fear for their safety
51 mins ago
51 mins ago