It is alleged a third motorist has fallen for this trick and lost his vehicle in the process. 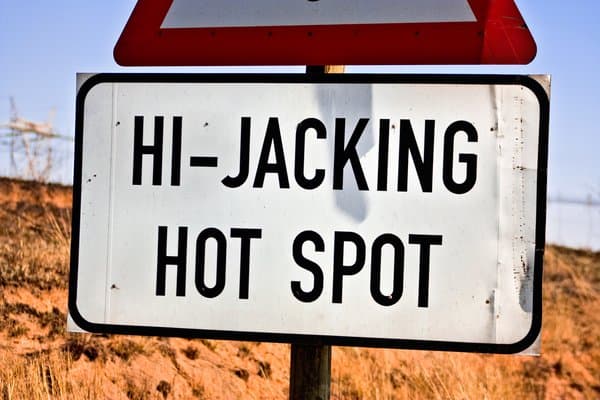 The community is urged to be more vigilant since hijackers are walking and driving around the area for no apparent reason. Photo: somadjinn

Another unsuspecting driver became a hijacking victim on Saturday, 11 March, when he was pulled over by suspects posing as metro police officers, Krugersdorp News reports

This is the third incident this year in which victims were hijacked in the area by suspects posing as officials. As in the previous cases, a white VW Polo Vivo with blue lights was used to pull over the unsuspecting driver.

The victim alleges he was driving in a company vehicle when he was pulled over. Two unknown males dressed in full metro police uniform approached him and asked for a cold drink.

When the victim took out his wallet to give them money, one of the suspects pointed a firearm at him and forced him out of his vehicle.

He was forced into a third vehicle, an Opel Corsa bakkie. The bakkie had four occupants when he stepped into it. En route, the suspects took all his personal belongings.

The driver and suspects took him to an open space in Soweto, where he was dropped off. He was rescued by a passerby and taken to the nearest police station.

The registration number of the stolen Nissan Hardbody is FP 09 SY GP.

One of the previous incidents took place in similar circumstances – on March 2, suspects also in a white Polo Vivo pulled an unsuspecting driver over. The suspects approached the vehicle, and the victim noticed they were dressed in traffic police uniforms. After occupying the victim’s bakkie, they also took him to a place in Soweto, where they dropped him off and fled the scene. They also had a firearm and took all his personal belongings as well.

Thus far, however, none of the victims has sustained serious injuries. The registration number of the Polo is not yet known, and police have not yet confirmed that these cases are linked.

In a previous press statement, Sergeant Tshepiso Mashale, spokesperson for Krugersdorp police, urged the community to still be vigilant and report any suspicious activity that may take place in Krugersdorp. “The public must inform us about these situations in order for action to take place,” said Mashale.