West Rand family woken up by car landing on their roof

The driver of flying car, a young man who seemed intoxicated, climbed out of the cab and went tumbling to the ground. The Potgieter family on the West Rand was woken up by one of the loudest bangs they had ever heard at 2am this morning, 15 March, Krugersdorp News reports.

Coenie and Engela Potgieter were safely tucked in their beds, fast asleep, when they were rudely awoken by a horrific sound and a shaking house.

They went outside to investigate. To their great surprise, they found a double-cab bakkie lodged on the roof of their carport. The driver, a young man who seemed intoxicated, climbed out of the cab and went tumbling to the ground. He was arrested soon after police arrived on scene. Remarkably, the carport did not collapse. One of the corner poles was bent and the corrugated iron sheet was torn, but the rest of the carport stayed intact. 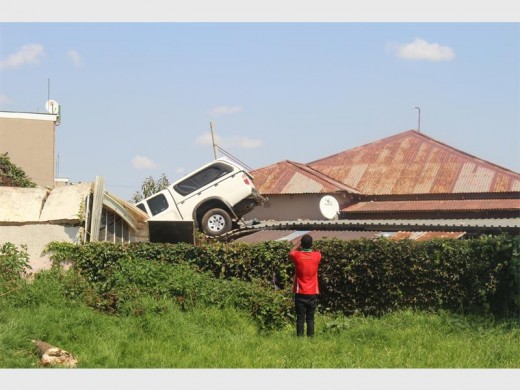 Spectators gathered to take pictures of this remarkable achievement.

Hendrik Potgieter, who also lives in the house, said he was impressed with the carport’s stamina.

As the sun rose after the incident, large groups of spectators made up of pedestrians, residents and motorists gathered to take pictures of this remarkable achievement.

The carport roof did not collapse.

The bakkie, which was lodged diagonally over the brick wall between two properties, could be seen from the busy Commissioner Street. It seemed like a monument to motorists to drive carefully.

Spectators made funny remarks such as: “Fast and Furious – Blikkies edition.”

Another chuckling spectator said this is what happens when you drink too much Red Bull, suggesting that the driver suddenly grew wings and flew over the wall. Even elderly spectators could not help but make fun of the situation. One elderly woman, aged 78, said parking in the area is difficult to find.

“This is what Blikkies people do when they cannot find parking,” she said.