The poisoned food must have been put out literally by a close neighbour of the property where the monkeys died, said the monkey helpline. 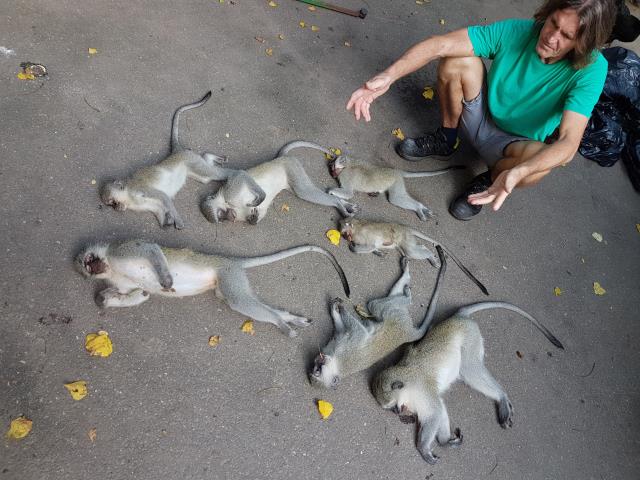 A Durban resident has found seven dead monkeys in her yard in Escombe, Queensburgh.

“She and her son, Luke, had found a dead Hadeda bird in the garden and took it to the bottom of the garden to bury it. When she got there, she found two dead monkeys in the garden, and on looking around found another dead monkey under a shrub up against the boundary wall right next to her house,” said Monkey Helpline founder Steve Smit.

It wasn’t long until she found other monkeys. An adult female was still breathing, and her baby was sitting on her body.

“We immediately drove there only to be told that she had found three more dead monkeys, and later another one, taking the number up to seven confirmed dead, and one adult female still alive with a live baby clinging to her.”

“Sadly, the adult female died en route to the vet, bringing the total number of monkeys who died of poisoning to eight that we know of,” said Smit.

Smit and his team attempted to capture the baby but was unsuccessful. “It was already dark and the baby easily evaded us. We have set a trap to catch the baby in the morning as it will not survive without its mother.”

Smit said the poisoned food must have been put out literally by a close neighbour of the property where the monkeys died.

“Death by this kind of poisoning is horrendously painful and stressful. Symptoms include weakness, headache, nausea, vomiting, abdominal ulceration coma, then death.”

“Of additional concern is that other animals, including pet dogs and cats, as well as mongooses, birds such as Hadedas can eat this poisoned food and die,” he said.

The Monkey Helpline has cases of poisoning every now and again, like the cases when 12 monkeys were poisoned in Waterfall a few years ago and six monkeys poisoned near the Queensburgh caravan park, also a few years ago.

“Killing monkeys is an unacceptable and illegal way of dealing with the presence of monkeys, and poisoning is certainly both immoral and illegal. The use of poison in this manner if a contravention of laws governing the handling of poisonous substances,” said Smit.
This case will be reported to both the Malvern SAPS and the Kloof and Highway SPCA for investigation and prosecution.

“Someone living close by knows who did this and we appeal to anyone with any relevant information, or even a suspicion, to come forward and speak to us, the SAPS or the SPCA inspectors,” he added.