In the clip, the teacher can be heard telling the learner to hand over his phone or 'I will hit you up until you give me the phone'. 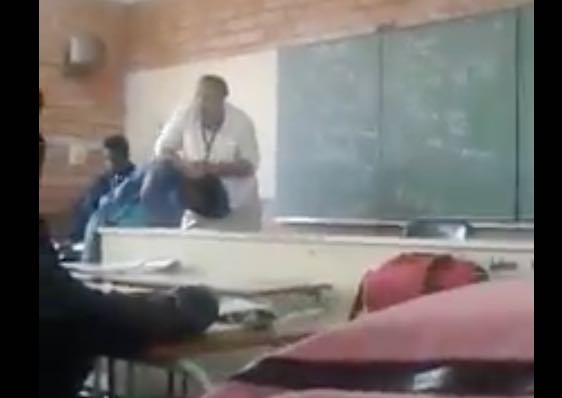 A  teacher at the Lenasia South Secondary School who was filmed slapping a learner for allegedly disrupting class is due for a disciplinary hearing.

The teacher was recently filmed by one of the learners and the video shared on Facebook, Rising Sun Lenasia reported.

In the clip, the teacher can be heard telling the learner to hand over his phone or “I will hit you up until you give me the phone”.

The pupil is then manhandled and dragged out of the classroom by the teacher.

“The department is aware of the incident in relation to the video which shows a teacher hitting a child at Lenasia South Secondary School after the learner refused the educator to hand over his phone in class disturbing teaching and learning‚” said Gauteng education department spokesperson Steve Mabona.

The department has condemned the act, saying any form of assault of learners in schools as corporal punishment is outlawed by the constitution of the country.

“The department can confirm that it will be conducting a disciplinary hearing against the educator. The date still needs to be confirmed‚”  Mabona was reported saying.

You can watch the video below, which can be published because none of the identities of any of the children is revealed in it, since no faces appear.