Billionaire Musk tweeted an offer to help build a battery farm in March after South Australia was hit with a total blackout when an “unprecedented” storm wrecked power transmission towers in 2016.

“This system will be three times more powerful than any system on Earth,” Musk told reporters in the state capital Adelaide.

Tesla has built the world’s current largest battery, which came online in California in December, Musk said, adding that the South Australian battery would be 100 megawatts — enough to power 30,000 homes.

“This is not a minor foray into the frontier… I’m pretty darn impressed with South Australia willing to do a project of this magnitude that is beyond anything else in the world,” Musk said.

“That takes a lot of gumption… I do see this as something that the world will look at as an example.”

The battery will be built in Jamestown, 230 kilometres (143 miles) north of Adelaide and will be paired with a nearby wind farm run by Neoen, a French renewable energy company, South Australian Premier Jay Weatherill said.

Experts said the battery could help transform the renewable energy landscape by addressing the intermittent nature of sources such as wind and solar by pairing them with a large-scale electricity storage system.

“Variability is one of the key challenges in integrating large amounts of renewables into power systems as we try and get towards 100 percent renewables,” Ariel Liebman of Monash University’s MEMSI energy institute told AFP.

“So we need a balancing mechanism that helps take some excess production when these things are producing a lot and then distribute it into the system when it’s needed and there’s not so much production.”

Musk said it was “common sense that if you have solar you must have battery because otherwise your power is going to be proportionate to how sunny it is”.

“I specifically think that the consistently lowering cost of batteries, coupled with renewables, is going to fundamentally reshape the energy landscape much faster than anyone thinks it will,” Cal Lankton, Tesla’s vice president of global infrastructure operations, added. 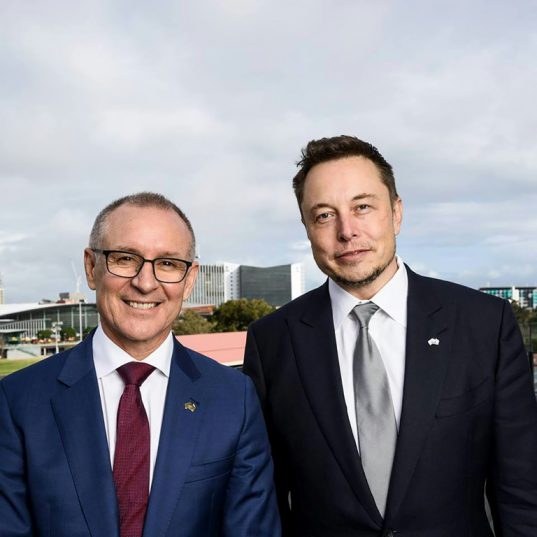 Musk acknowledged his company had to overcome the technical risks associated with building a project at such a large scale, but said Tesla was confident of its success.

The high-flying firm, known for producing electric cars, has agreed to deliver the battery “within 100 days or it is free”, Weatherill added.

No figures were given for the cost of the contract.

Neoen, which has built major projects around the world since being set set up in 2008, operates Europe’s biggest solar energy park in southwest France, which can produce the equivalent annual electricity to supply a town of 300,000 people.

South Africa-born Musk has envisaged Tesla as a company that can help reduce emissions by not only selling people electric cars, but also generating and storing the renewable energy that powers them.

Australia is one of the world’s worst per capita greenhouse gas polluters due to heavy use of coal-fired power.