Allegedly more than 50 Ford 1.6-litre EcoBoost Kugas, manufactured between 2013 and 2014, have already burst into flames. Picture for illustration. A Ford Kuga in flames on the N12 East near the Jet Park off-ramp in Johannesburg, 2 August 2017.

Ekurhuleni Disaster and Emergency Management Services (Dems) swiftly responded to a call about a vehicle on fire, Boksburg Advertiser reports.

“Upon their arrival they found the vehicle was engulfed in flames and the driver, who was the only person in the car, was standing helplessly on the side of the road watching it burn,” said Dems spokesperson William Ntladi.

“The crew started fighting the fire, and it was extinguished in no time, though the damage had already occurred. As per information received, the driver smelled something burning while he was driving and then saw flames coming from the engine compartment, in which it is believed the fire started.”

The colour of the vehicle was unrecognisable due to the extensive fire damage, and no casualties were reported on scene as a result of the fire.

So far, allegedly more than 50 Ford 1.6-litre EcoBoost Kugas, manufactured between 2013 and 2014, have already burst into flames. 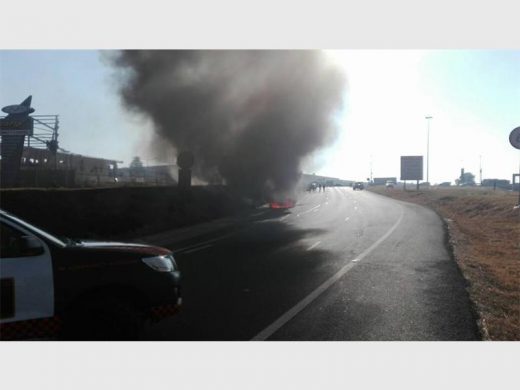 A crew from the Ekurhuleni Disaster and Emergency Management Services successfully extinguished the fire.

It is understood thousands of owners of Figos and Ikons‚ built in India between August 2004 and March 2012 and sold here‚ received emails asking them to ‘immediately’ contact a Ford dealership to replace their vehicle’s power-steering high-pressure hose. Ford said there would be no charge for the replacement hose and labour costs.

Ford has also invited Kuga owners whose vehicles were part of the recall announced in January to return their cars to dealerships for Phase 2 of the recall‚ the installation of a sensor to alert the driver when the coolant level drops. 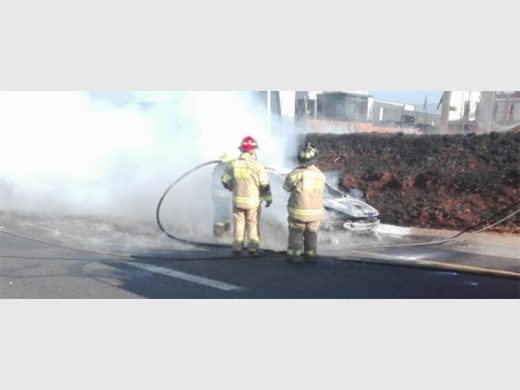 Firefighters putting out the flame