With the teams for the play-offs all but confirmed on Wednesday, provided none were docked points for failing to meet quotas, the Spar National Netball Championships descended into chaos yesterday after a late change to the schedule. 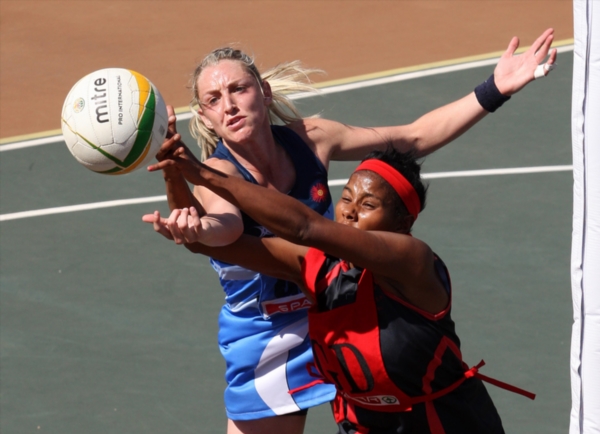 Erin Burger of Gauteng North (Left) and Zingaphi Mcaza compete for the ball in the match between Nelson Mandela Bay and Gauteng North during day 4 of the SPAR National Netball Championships at the Royal Bafokeng Sports Palace on August 08, 2013 in Rustenburg, South Africa. (Photo by Reg Caldecott/Gallo Images)

Having lost only one match in the pool stages, Gauteng Central coach Martha Mosoahle was furious after she discovered yesterday morning her players would need to turn out in a quarterfinal.

The original schedule indicated that there would be no last-eight stage and the top two sides in each of the pools would progress automatically to the semifinals.

“I only heard this morning from a friend that it had changed.” Marlize Linde of Mangaung stretches for the ball with Annelize Streicher left in the match between Mangaung Metro and Boland during day 4 of the SPAR National Netball Championships at the Royal Bafokeng Sports Palace on August 08, 2013 in Rustenburg, South Africa. (Photo by Reg Caldecott/Gallo Images)

Dorette Badenhorst, the coach of North West district side Dr Kenneth Kaunda, who went unbeaten in the group stages to finish top of Pool 2, was equally upset. Badenhorst said she had been informed of the change by a member of the media during an interview yesterday afternoon. She believed it was unfair to make teams play in quarterfinals and semifinals on the same day.

“This affects us terribly,” Badenhorst said.

“When you get to the tournament you plan according to the schedule, and then the day before you hear that you have to play a quarterfinal. The whole tournament starts all over again on the second last day.

“You can’t go back on a decision like this. These decisions should have been made long ago.”

Netball SA president Mimi Mthethwa said the decision to play quarterfinals had been made after Umgungundlovu had been added to the A-section, and the teams were split into two pools. The six-team pools were confirmed before the start of the tournament, however, while the play-off changes were made on Tuesday, and team managers were informed on Wednesday. Marle Geel of Dr Kenneth Kaunda (Left) and Ntutu Mjijwa compete for the ball in the match between Gauteng Central and Dr Kenneth Kaunda during day 4 of the SPAR National Netball Championships at the Royal Bafokeng Sports Palace on August 08, 2013 in Rustenburg, South Africa. (Photo by Reg Caldecott/Gallo Images)