The truck occupants were handcuffed and cellotape was put around their eyes and mouths. 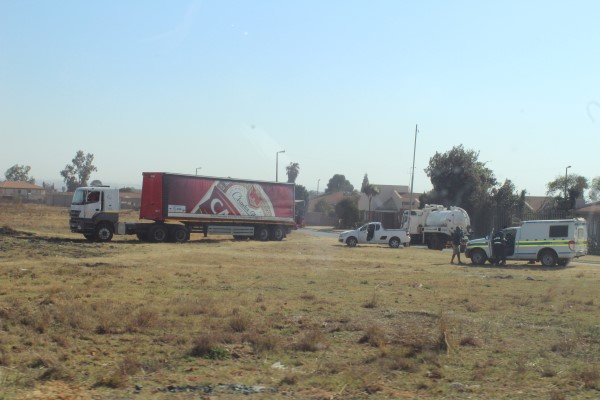 After criminals hijacked an SA Breweries truck in Florida, on the West Rand, alcohol worth over R100 000 was stolen, and the vehicle was abandoned with its driver and assistants in Lenasia Extension 9’s Seine Street, Rising Sun Lenasia reports.

The truck was hijacked at around 7am on Wednesday, August 16.

According to one of the assistants, the truck had been awaiting a store to open in order to make a delivery when four armed men pounced.

“We had offloaded stock, and were waiting for the place to open, when one of the men approached us asking for beer. When we refused, he told us to load all stock back on to the truck,” one of the trucks assistants said.

Here the man revealed a firearm under his T-shirt and ordered the assistants back into the truck.

“He handcuffed us to each other and put cellotape around our eyes and mouths and threw us behind the driver’s seat,” he added.

The truck driver was ordered to load all the stock back on to the truck. He was then tied up with his own shoelaces, blindfolded and gagged. He too was thrown behind the driver’s seat. Two of the four assailants were in the truck while other two followed the truck in a blue Nissan Almera. According to the victims, the men drove around for a while and made stops during the route, but they do not know where.

Alcohol worth over R100 000 was stolen, and the truck was later abandoned in Lenasia.

“When we realised they had left, we had to flag down passing motorists to assist us,” one of the victims said.

A resident on Seine Street said she did hear a truck driving past her house, but dismissed it.

“When I looked through the window that’s when I saw the men struggling to get out of the truck,” the resident said.

She immediately phoned her son, who then phoned security.