A shootout ensued between police and the suspects, resulting in one of them being shot dead. 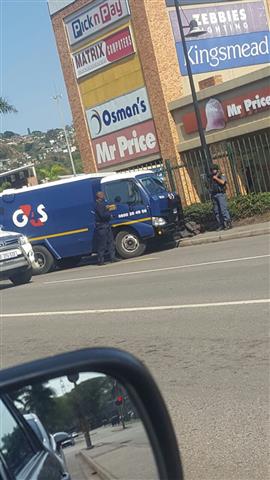 The crime scene where a suspect was shot dead.

An alleged cash-in-transit robbery suspect was shot dead in a shootout with police at a shopping centre in Springfield, Durban, on Monday.

According to police spokesperson Captain Nqobile Gwala, a cash-in-transit vehicle that was picking up money from one of the stores in the centre was held by a group of heavily armed men who demanded cash from the security guards.

The suspects allegedly fled with a cash box. A shootout ensued between police and the suspects, resulting in one of them being shot dead, Rising Sun Overport reported.

Gwala said police are still on the hunt for the rest of the suspects, who fled towards the direction of the Parlock area.