The ballistics expert employed by Oscar Pistorius may face a tough time in the witness stand if the cross-examination of forensic geologist Roger Dixon last week is anything to go by. 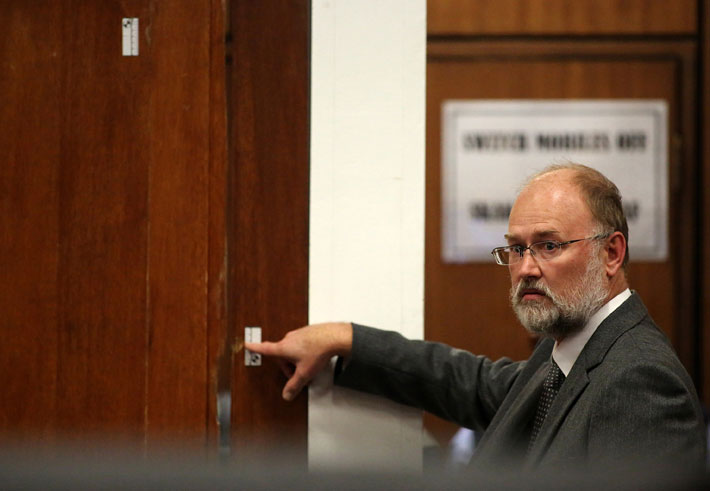 Private ballistics expert, former policeman Tom “Wollie” Wolmarans, is part of what was described in the media as Pistorius’s “dream team” to defend him against a murder charge following the Valentine’s Day shooting last year of his girlfriend Reeva Steenkamp.

The State alleges Pistorius had deliberately shot Steenkamp behind a locked toilet door after a heated argument.

Pistorius testified that he had fired four shots through the door involuntarily, believing he was about to be attacked by an intruder after hearing the sound of wood moving in the toilet.

Retired pathololgist Prof Jan Botha and Dixon both contradicted the evidence of police Captain Chris Mangena that Steenkamp stood facing the door when she was hit in the hip by the first bullet, whereafter she fell backwards on a magazine rack.

They also contradicted Captain Mangena’s evidence that Steenkamp was hit in the back by a fragment of a bullet ricochet which first hit the wall, with the third and fourth shot hitting her in the arm and one of her hands which she was holding defensively over her head before hitting her in the head, causing her to slump with her head on the toilet while still in a seated position on the magazine rack.

Both said she was angled towards the door when the first shot hit her, that the bruises on her back were caused by a fall against the magazine rack, that her arm was very close to the door when she sustained the wound which shattered her upper arm and that she must have been falling to the floor when she was shot in the head.

Prof Botha also contradicted State pathologist Prof Gert Saayman’s evidence that it would have been strange for Steenkamp not to scream after being hit in the hip and arm. He said if the shots were fired in quick succession, as Pistorius testified, she would not have had time to scream before the deadly head wound.

Prosecutor Gerrie Nel attacked Botha’s findings as invalid, but tore into Dixon, questioning his qualifications and integrity and accusing him of being “irresponsible” by expressing opinions on subjects in which he was not an expert.

Dixon testified that he had assisted Wolmarans in his investigation by taking measurements at the crime scene. He had also helped Wolmarans with his preliminary report.

His poor command of English might be an aspect that could disadvantage Wolmarans in the witness stand, unless he chooses to testify in Afrikaans and rely on the court interpreter, who has in the past been criticised for alleged inaccuracies.

Wolmarans was a policeman for about 16 years and previously worked at the police Forensics Laboratory as a ballistics expert before starting his own independent forensic ballistics business in 1992.

As far as can be ascertained his highest academic qualification is Grade 12, but he has worked with many international forensic laboratories during his long career, is a member of the Association of Firearms and Tool Mark Examiners and in 2000 assisted the United Nations as a ballistics expert during the International Criminal Tribunal in Kosovo.

He has testified in hundreds of criminal trials, including the trial of Cape Town strip club owner Michael Jackson, who was convicted of murdering a street child and sentenced to 15 years’ imprisonment.

The trial will resume on 5 May.