The suspect pretended to be a doctor when he arranged a test drive at a car dealership. Police confront the car thief at the Tongaat Toll Plaza

Described as a “well-known con artist” by a SAPS member in Empangeni, KwaZulu-Natal, Christopher Bheki Mhlenyama, 68, was on Monday arrested after he orchestrated his latest scheme: manipulating an Inyanga Motors salesman and making off with a white E Class Mercedes Benz, Zululand Observer reports.

While reports are sketchy, it appears that Mhlenyama, falsely pretending to be a doctor, arranged a viewing and test drive of the vehicle.

He met a salesman at a petrol station, and they drove to a hospital where Mhlenyama, still in possession of the keys, told the salesman he wanted to show the vehicle to his wife. He then jumped back into the car and sped off.

The salesman immediately alerted authorities, and a motor theft case was opened at Empangeni Police Station.

A tracking company alerted the relevant authorities that the vehicle, fitted with a tracking device, was monitored heading towards Durban on the N2. 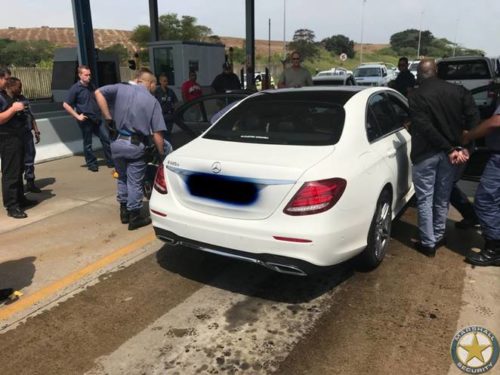 Members of the Marshall Security Special Operations Team, Z2 Security, Hawks Security, and police positioned themselves on the N2 at the Tongaat Toll Plaza. The Umhlali K9 police unit picked up the vehicle and followed it.

When the vehicle entered the tollgate, it was stopped, and Mhlenyama and a female suspect were arrested.

On Wednesday afternoon, he appeared in the Empangeni Regional Court, where his case was remanded to today (Thursday) for a bail application

According to a police  member, Mhlenyama has more than two previous convictions after he committed crimes with a similar modus operandi.