The revolver was reported as stolen in George in 2016. 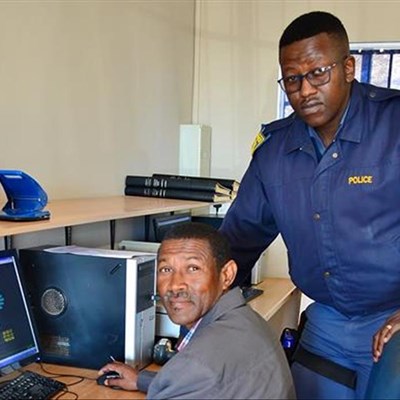 Three men robbed a business in Marsh Street early this morning (Wednesday, 18 October) in Western Cape, and the KwaNonqaba police arrested one of the suspects in Asla Park, Mossel Bay Advertiser reports.

At approximately 04:00 the trio broke into a business run by foreign nationals on Marsh Street.  The suspects entered the business through the roof of the building and accosted the family, asleep in the shop, and robbed family members at gunpoint.

The robbers made off with cellular phones, computer tablets, laptop computers and a sizable amount of money.

However, officers of the KwaNonqaba Police Station on routine patrol in Adriaans Road minutes later noticed an Opel Corsa vehicle with three occupants that acted suspiciously. The police officers decided to investigate, but when they approached the Corsa, the driver sped off.

The police gave chase and managed to apprehend the driver of the vehicle in Willowmore Street in Asla Park. Other two passengers managed to escape. Constable Thobani Kumkani of the KwaNonqaba Police Station with the Opel Corsa the suspect was driving. Photo: Nickey le Roux

Police found a revolver in the jacket pocket of the driver, a 32-inch television, cellphones, computer tablets and almost R13 000 in cash.

KwaNonqaba police spokesperson Sergeant Kapp commended the team that apprehended the perpetrators for its vigilance and will investigate charges of the illegal possession of a firearm and the possession of suspected stolen goods.