After taking another huge stride in her resurgent career, Lebo Phalula hopes to build on her impressive form as she chases faster times. 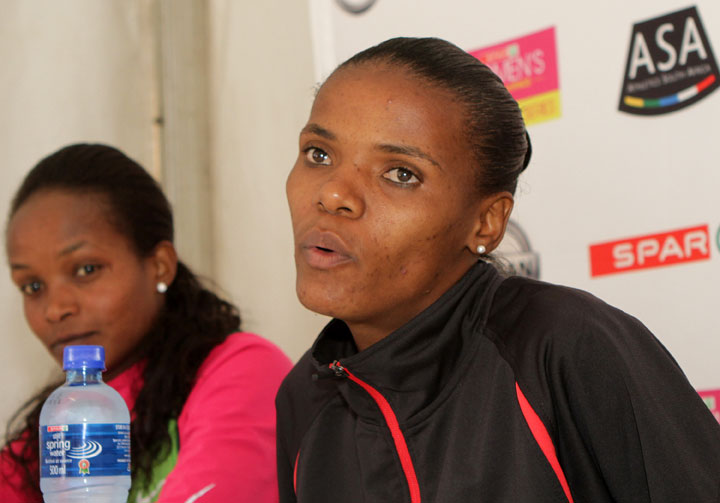 FILE PICTURE: Winner Diana Lebo Phalula at the press conference after the SPAR Women’s 10km Challenge from Greenpoint on April 04, 2014 in Cape Town, South Africa. EDITORS NOTE: For free editorial use. Not available for sale. No commercial usage. (Photo by Reg Caldecott/Gallo Images)

Phalula remains unbeaten in the Spar Women’s Challenge 10km series, following her convincing victory in the second leg in Port Elizabeth on Saturday.

She broke away in the third kilometre and gradually extended her lead to finish in 32:27, the fastest performance by a South African in five years, as she smashed her six-year-old personal best by 34 seconds.

Former international stars Elana Meyer, Colleen de Reuck and Zola Budd are the only SA women to have run faster over the distance.

Phalula joined Michael Seme’s training group in Pretoria this season, which has resulted in a string of fine performances.

“I’m happy and motivated by my run today. It shows that what I’m doing in training is working,” she said after the race.

“You never know what lies ahead, so I don’t want to be over-confident, but I think I can go faster.”

Rene Kalmer fought back in the latter stages to finish second in 33:27, edging Mapaseka Makhanya by one second.

“It feels like a win for me after I finished eighth in the Cape Town leg. I wanted a top-three finish so I’m very happy,” Kalmer said.

Makhanya, last year’s series winner, did most of the hard work in the chasing group after allowing Phalula to surge ahead in a solo effort.

“I regret that I didn’t go with her,” Makhanya said.

“Lebo often plays games with the lead group, so I thought she would come back to us, but we couldn’t close gap. .”

Meanwhile, one of South Africa’s most accomplished road runners, Sonja Laxton, finished third in the grandmasters’ division in 57:12. It was her first race since she sustained serious injuries when she was hit by a car while training in November.