It took the Mangaung Metro players a few seconds to realise what they had achieved, but once reality had sunk in, they leaped, hugged each other and celebrated their historic performance amid the refreshing spray of cold champagne in the Rustenburg sun. 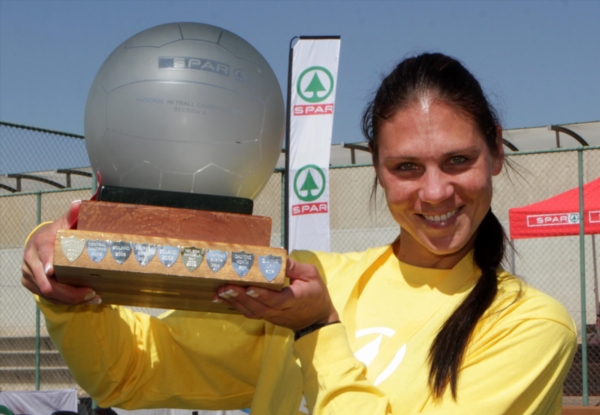 Adele Niemand, captain of Mangaung Metro with the trophy after they beat Gauteng North in the final during day 6 of the SPAR National Netball Championships at the Royal Bafokeng Sports Palace on August 10, 2013 in Rustenburg, South Africa. (Photo by Reg Caldecott/Gallo Images)

“Usually we will see an official run around the side of the court to the umpire to indicate that the game is over,” said Mangaung vice-captain Maryke Holtzhausen, who was beaming after her side won the National Netball Championships on Saturday.

“This was the first time I saw an umpire wearing a timing device on her arm, so when she blew the whistle it seemed like a goal had been scored. It took us a moment to realise we had won.”

Mangaung stunned Gauteng North, aiming for their fourth successive title, with a 39-36 victory in a thrilling final encounter at Royal Bafokeng Sports Palace.

The Free State outfit bagged their first A-section gold medal at the championships in more than 50 years.

“It’s a fantastic feeling, but it’s also important to note that it was not easy,” said Mangaung coach Burta de Kock.

“We expected a hard game against Gauteng North, and it was a hard game.

“It was the leadership on the court that helped us through this tournament.”

After playing in six finals over the last decade, captain Adele Niemand was relieved to finally secure the national title, grabbing a surprise win against a Northerns team who had gone unbeaten through the week.

“I’ve played for this team for 10 years and it feels fantastic to know our hard work has paid off,” Niemand said. “I’m very proud of our girls.”

Having won the national student title earlier this season, Holtzhausen, who captains the Proteas national team, was delighted with the success of Mangaung.