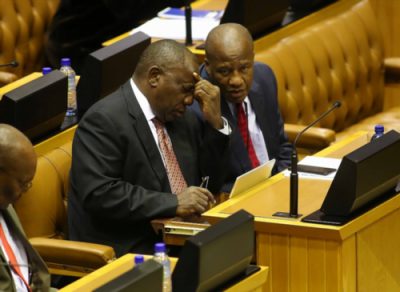 Mthembu said Ramaphosa’s attitude of being a service to the people is embedded in his DNA.

He said throughout Ramaphosa’s historical political activism as a law student, a unionist in the mining sector and as one of the negotiators in building a new democratic South Africa, Ramaphosa has been present and constantly working to change the lives of South Africans.

“We believe at this stage of our struggle you will assist the ANC in ensuring people have better lives, that is why the 54th conference elected you as the president of the party,” Mthembu said.

Mthembu was the last to comment on Ramaphosa’s election on behalf of his organisation.

Opposition parties, including the Democratic Alliance, the Inkatha Freedom Party, the National Freedom Party and the United Democratic Movement, congratulated Ramaphosa on his election, with all chorusing the call that the newly elected president should immediately deal with corruption, state capture and the state-owned enterprises.

The Economic Freedom Fighters stormed out of parliament saying the organisation cannot be part of an “illegitimate” process.

Ramaphosa is expected to deliver the State of the Nation Address tomorrow.

New Gauteng mayors' failure to appoint MMCs is a cause for concern, says Maile
5 hours ago
5 hours ago

New Gauteng mayors' failure to appoint MMCs is a cause for concern, says Maile
5 hours ago
5 hours ago