A school governing body member says the absence of teachers has created chaos, with a pupil stabbed last week and the deputy principal attacked with a brick. 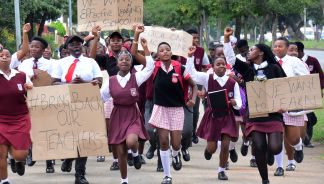 Angry and frustrated pupils from Eldorado Park Secondary School took to the streets yesterday to protest the absence of teachers at their school.

The teachers – believed to number 14 – have not been in their classrooms since last year following allegations of racism between coloured and black staff members.

The principal was not able to speak to the media. However, the Gauteng education department said the issue was being investigated.

The pupils, accompanied by some parents, also protested outside the offices of the department in Johannesburg.

“We just want our teachers back. I am very angry and hurt that I haven’t been learning. Nelson Mandela said this country is a rainbow nation, so I don’t understand why this is happening,” one pupil, who did not want to named, said.

Another pupil added: “We have not been learning for weeks now. We are protesting because we want our teachers to come back to school. I just want to learn, that’s all.”

A school governing body (SGB) member said the absence of teachers had created chaos in the school’s management system.

“One pupil was stabbed with scissors last week and another pupil also attacked the deputy principal with a brick. There is no supervision and it is becoming problematic,” the member, who did not wish to be named, claimed.

The absence of teachers has left parents worried and concerned.

“We are not happy about what is happening. Children are not monitored. They don’t want to go to school and they get to school late,” said Shenika van der Merwe, who has a child at Eldorado Park Secondary School.

“There have been disruptions since schools opened and there has been a large shortage of teachers since then.”

Van der Merwe said teachers had not been present since November, despite several meetings being held to resolve the matter.

“The principal told us that he doesn’t know what the root of the problem is. He is also trying to solve this problem, together with the SGB,” said Van der Merwe.

Local councillor Peter Rafferty urged the South African Democratic Teachers Union (Sadtu) to put an end to the protests and said the best interests of pupils should be put first.

“Sadtu has painted this community as being racist but this is a multiracial community. This has nothing to do with race. Sadtu just wants to have power over who should be appointed in schools,” Rafferty claimed.

Rafferty urged all pupils to refrain from interfering in matters concerning teachers and the department.

“We want to call on all parents and learners not to be drawn on this racial battle that is being spread around,” said Rafferty.

Democratic Alliance shadow MEC for education Khume Ramulifho said the department needed to take action against teachers who have been absent.

“We need intervention from the department. While teachers have their rights, which are protected and guaranteed, they shouldn’t be protected at the expense of learners,” said Ramulifho.

Gauteng education department spokesperson Steve Mabona said an investigative team had been appointed to look into the matter.

“While waiting for the finalisation of the investigation, the school was empowered to find replacement teachers to teach in the interim,” he said.

“We can confirm about five replacement educators are teaching, however, the school must finalise the appointment of other replacements accordingly.”

Mabona said the teachers were reporting to the district office. 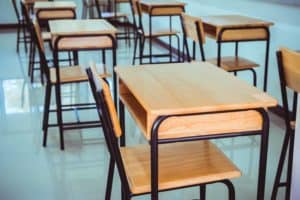 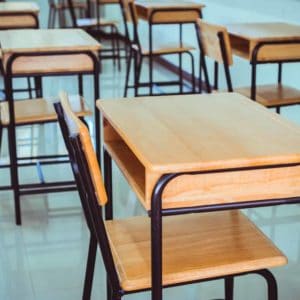