Cosatu and Saftu say the VAT hike does nothing for transformation and instead further plunges the poor and marginalised into dire straits. 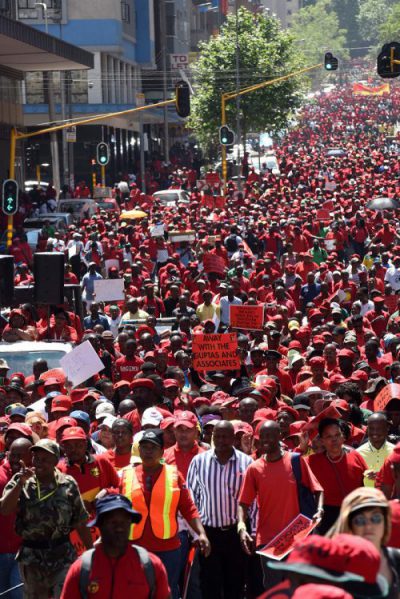 Trade unions will most certainly not be taking a 1% increase in VAT to 15% lying down and plan protest action against the announcement by Finance Minister Malusi Gigaba in his budget speech.

Both trade union federation Cosatu and the South African Federation of Trade Unions (Saftu), in condemning the increase, have lambasted Gigaba, who they said was punted by the ANC government as the poster for radical economic transformation.

They say his announcement does nothing for transformation and instead further plunges the poor and marginalised into dire straits.

“We will definitely take to the streets. We are having a meeting of the NEC on March 16. We will recommend that we strike on this matter,” Saftu general secretary Zwelinzima Vavi said.

The “painful part is that those imposing this tax form part of the initial pickets, demonstrations and strikes in 1991, 1992 and 1993”, when the National Party government enforced VAT, he said.

“Before 1991 there was no VAT. The National Party in its last dying days imposed VAT and Cosatu, with the support of the ANC, went berserk. We were in the streets, we protested … but we couldn’t stop it,” recalled Vavi.

“The only thing we got was to cushion the impact on the poor in having to pay for bread, for mielie rice and those types of things.

“And then there comes a government that messes up the economy big time. It Guptarises everything and there is reaction from international markets. Then they punish the very same people who voted them into power with an increase in VAT.

“There is no way we can strike against the apartheid regime and now not strike against a democratically-elected government. The interest of our workers is at stake here and that is where we are going.”

The VAT increase is a direct result of a combination of corruption and an ANC “ideology” allowing business to prosper with the hope this wealth trickles down to the poor by means of employment, he added.

“For the past 20 years they have pursued this and it has failed dismally. That is why we are sitting with poverty, unemployment and inequality. To make things worse (former president Jacob) Zuma comes in for nine years. And now we are paying.”

Vavi accused Gigaba of “lying when he said only the rich would be impacted”.

“He knows there is no such thing. The poor as a percentage of their income spend more on VAT than the rich.”

Cosatu spokesperson Siwe Pamla said its three-day central executive committee (CEC) meeting begins on Monday. “It is fortunate all of this happened at a time where we have an opportunity and platform for the CEC to reflect. We are going to leave it to the CEC to guide us on how to proceed.”

He labelled Gigaba’s budget as the “the most political budget we have seen in a long while”.