The Minister of Police reveals the motive behind the fatal attack on Engcobo police was for the suspects to get police firearms to rob a bank across the road. 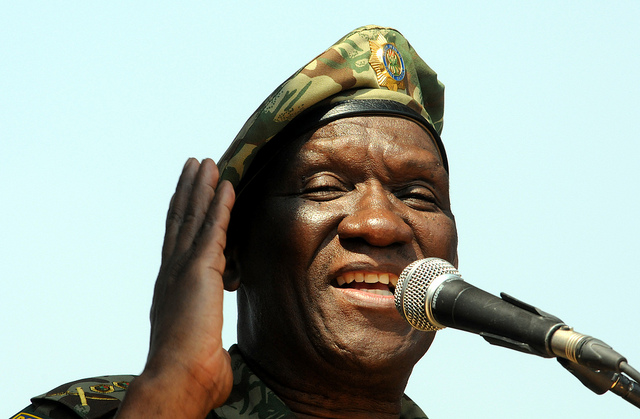 Newly appointed Minister of Police General Bheki Cele has issued a stern warning to criminals that police will not take “militarized” criminal action against them lying down.

Cele was speaking in parliament today where he issued a statement on increased police killings, focusing on the recent killing of five police officers in Engcobo in the Eastern Cape.

“We want to make it very clear that SAPS are not an undertaker company; we resist to bury our members. And I want to issue a strong warning that any military engagement by the thugs engaging SAPS should [end with] one side that goes to bury after engagement and that side shall not be the South African police,” the general said.

Cele gave a detailed report on the tragic police killings and the subsequent fatal shooting and arrest of some of the suspects linked to the murders at the police station.

The minister said the police officers who were attacked at the police station and others from the same precinct who were ambushed and their dead bodies dumped on the side of the road were Warrant Officer Zuko Mbini, Constable Sibongiseni  Sondlana, Constable Zuko Ntsheku, Constable Nkosiphendule Pongco, Constable Kuhle Matete and one retired member of the South African National Defense Force.

On February 22 information was received from reliable sources that a taxi driver was in possession of a pistol which was suspected to have been used at the shooting at Engcobo police station.

Cele said the information was followed up which led to the arrest of one suspect who was found in possession of a Norinco pistol.

Following the arrest, a technical team then conducted an operation at the Seven Angels Ministry church.

“Upon arrival at the premises the task team came under fire from a nearby location and immediately retaliated, resulting in the seven suspects being fatally wounded and a further three suspects being wounded,” he said.

An additional 37 male suspects were arrested at the church premises, the minister added.

He said the following firearms and other goods were seized from the premises:

“All the suspects who were arrested during the operation were questioned and it transpired that only five suspects out of the 37 arrested individuals were involved in the murder of the police officers at Engcobo police station,” Cele said.

The minister said according to the confession made by the five suspects a group of eight had planned to rob a bank situated opposite the police station.

The eight then identified the police station as a place where they could acquire the firearms needed for their robbery and so they decided to attack the police on February 20.

“One of the individuals was tasked with luring the police officers on patrol duty in town towards the direction of Mthatha. A suitable spot was identified near the Nyanga High School for the rest of the group to lie in ambush for the SAPS patrol van,” Cele said.

However, the minister said the initial attempts by the individual tasked with luring the patrolling officers were unsuccessful until he was forced to notify his accomplices that the police were not responding to his attempts.

“He was then advised to make a reckless u-turn in front of the police officers which he subsequently performed. The SAPS patrol van pursued the individual to the area near Nyanga High School and stepped out of the vehicle to confront the individual and were subsequently shot by the group lying in ambush,” Cele said.

Cele said the attackers then commanded female police officers to open the safe where more firearms were kept.

“These were female members who were forced to walk and lie on the blood that was there of their colleugues,” he said.

Cele said while the attackers were removing firearms from the police station safe a patrol van arrived at the precinct. This prompted the suspects to fire at the driver and his partner who were also killed and their firearms taken by the suspects.

The suspects then proceeded to the bank opposite the police station. He said the suspects intended to use a grinder to access the bank’s safe and steal money.

“Whilst grinding the safe they were disturbed by another SAPS patrol van that came from the Mthatha direction and they decided to flee from the scene. The group drove towards the mountain behind Engcobo where they buried the firearms and discarded the SAPS patrol van and bullet resistant vest that they had stolen,” the minister said.

He added that the firearms were found by a group of hunters buried in a shallow trench. The suspects then confronted the hunters and took the firearms back to their place of residence.

“They marked some of these firearms with red paint and then hid them until Friday night when they were confronted by the SAPS task team and the firearms were seized,” Cele said.

Cele said three of the suspects who were shot and killed at the Seven Angels Ministry church have been positively linked to the attack at the police station.

He said forensic tests and ballistic analyses are underway to link the arrested suspects to the shooting at the police station.

The five suspects appeared in court on February 25 and the case has been remanded to March 8 for formal bail applications. The suspects remain in police custody and investigations are continuing.

The minister said the national commissioner of police has deployed police officers to the Engcobo area.

“The community of Engcobo and surrounding areas are assured that day to day policing will be maintained at the required level and professionalism,” Cele said.

He added that out of the 10 firearms stolen at the police station nine have been recovered with the last being found yesterday.

Cele said the church will not function as a church at the moment but will rather be considered as a crime scene. The conclusion of ongoing investigations will determine whether the premises will reopen as a church.

Four more officers have died following the attacks at Engcobo, taking the number of police officers killed in the last two weeks to nine – five fatally gunned down at the police station in the Eastern Cape, three involved in a car accident and one shot and killed at a mall in KwaMaphumulo in KwaZulu-Natal.

Cele described the deceased officers as “committed compatriots” devoted to fighting crime and protecting their communities.

He saluted the officers, extending words of condolences to their family, friends and loved ones.

The minister pledged that the South African Police Service commits to ensuring that an attack like the one at Engcobo does not happen again.