Mamabolo gives it both barrels

Former champion Ludwick Mamabolo broke the monotony of the pre-race Comrades Marathon media conference on Friday, hitting out at a journalist and criticising his fellow South African athletes. 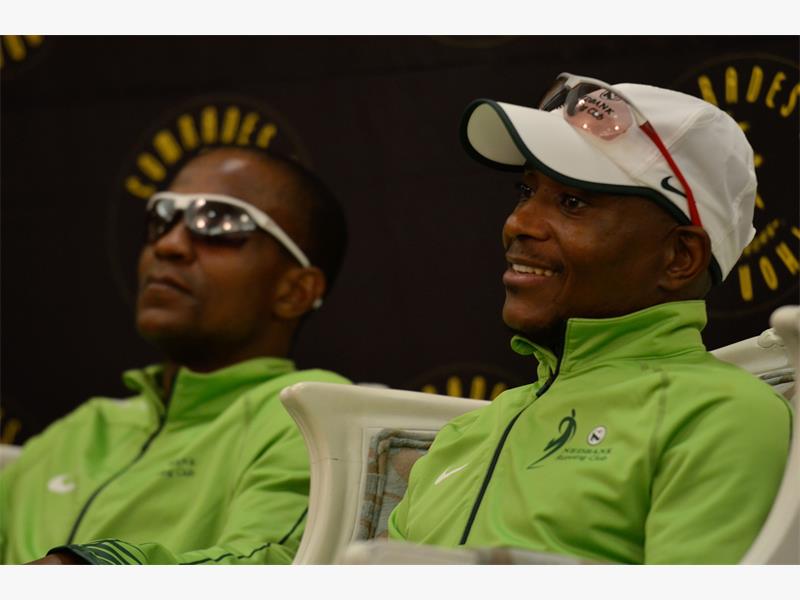 CONFIDENT. The winner of the 2013 Comrades Marathon, Claude Moshiywa, right, speaks to the media yesterday in Durban ahead of tomorrow's race. With him is former champion Ludwick Mamabolo.
Picture: Alaister Russell.

Mamabolo tested positive for methylhexaneamine two years ago, after becoming the first local runner to win the race in seven years, but was later cleared of all charges.

Asked yesterday whether that saga had played a role in his mental approach to the race, after fighting a 10-month doping case, Mamabolo lashed out.

“What are you asking me? I don’t understand the question because it’s water under the bridge,” he said.

Mamabolo, who was fourth in last year’s “up” run, said he was disappointed that former three-time champion Stephen Muzhingi of Zimbabwe had battled with injuries in the build-up, and he went on to criticise local runners for their lack of intent.

“He’s the kind of guy I want to compete against, not a disabled person.”

Muzhingi was not his usual self, lacking the confidence he has brought to the race in recent seasons, after struggling to overcome injury concerns.

“I only started training in late January so I’m not 100% fit,” he admitted.

Mamabolo and Muzhingi will be gunning for the coveted

R350 000 prize for first place against a wide-open elite men’s field. Claude Moshiywa, who last year became the first South African to win the “up” run since 1992, will hope to recover from a groin injury and become the first local athlete since Bruce Fordyce in 1988 to defend his Comrades crown.

Jonas Buud of Sweden, who was second last year, will lead the foreign challenge in the prestigious race in KwaZulu-Natal.