The town's services are delivered by Tshwane and its electricity supplied by Cullinan, and residents want to be demarcated back to Gauteng. 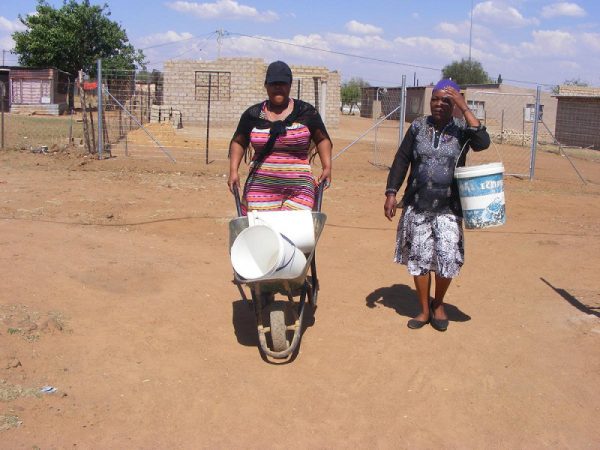 Sisters Maria and Ouma Masilela of Moloto village in Mpumalanga on their way to buy water from the home of another resident who has a borehole in his yard. PHOTO: ANA

Moloto village straddles the border of Mpumalanga and Gauteng, about 60km northeast of Pretoria, and although the area is officially in Mpumalanga, residents do everything in Gauteng, which is why they have pledged to put up a fight for a change in demarcation.

Residents represented by the Moloto redemarcation task team want to be relocated back to Gauteng, from where the municipality was rezoned in 2011, when their erstwhile Donokeng local municipality was incorporated into Tshwane.

They argue that their area was incorporated into the Thembisile Hani Local Municipality in Mpumalanga although neighbouring farms and plots were taken over by Tshwane.

Petrus Molapo, task team convenor, said Moloto was part of Gauteng when the provinces were first demarcated in 1994. He says they do not know how they ended up in Mpumalanga.

“Title deeds for properties in the area of Sybrandskraal, which is right next to us and was, together with Moloto, part of Dinokeng Municipality, are held in Gauteng. Why then are we are in Mpumalanga?” he asked.

Molapo said their services were delivered by Tshwane, with their electricity supplied by the town of Cullinan in Tshwane.

His deputy, Vusumuzi Kheswa, said Moloto people work in Pretoria, pay taxes in Pretoria and in the process are boosting the Gauteng economy, but they officially reside in Mpumalanga.

“This does not make sense. It is impractical and, even worse, we do not know how we ended up in Mpumalanga,” Kheswa said.

He said they have been deliberating on the matter for years and although it was pure coincidence they were questioning it in an election year, this was the perfect chance to raise pressing issues.

“We do not want to politicise this matter, it is the voice of the community which must be heard because this is the time when politicians and authorities listen,” Kheswa said.

He said that, in March last year, they wrote to national and Gauteng provincial cooperative governance, but said their plight has simply been ignored.

Residents believe services are better in Gauteng. They say Mpumalanga has overcrowded health facilities and schools.

There have been some violent protests sparked by demarcation, with people in areas such as Merafong, Moutse and Matatiele demonstrating to the extent they were willing to fight when decisions were taken on their behalf.

The municipal demarcation board has reportedly cautioned against demarcation related protests ahead of the elections, with the board’s outgoing chairperson, Jane Thupana, saying government’s decision to use the board to restructure unviable municipalities had its flaws.

This week, the board is celebrating 20 years of existence and will host a two-day conference in Boksburg’s Birchwood Hotel.