The journalist's decision to bring up Malema's Hyde Park address, allegedly owned by Adriano Mazzotti, did not go down well. The longstanding feud between Economic Freedom Fighters (EFF) leader Julius Malema and investigative journalist Jacques Pauw – best known for writing The President’s Keepers, a bestseller about former president Jacob Zuma – escalated on Wednesday night, with the politician reacting angrily after the journalist mentioned him in a tweet.

Pauw, in his tweet, references an article he wrote late last year about Mazzotti’s tax situation.

According to Pauw, while Mazzotti had claimed to have been tax compliant since 2014, this was clearly not the case and he would now “lose his Hyde Park villa”.

Then Pauw added: “Neighbour Malema is going to be a lonely man.”

Malema responded bluntly: “You can go f^*€£ yourself”.

It’s unsurprising that Pauw’s calling Malema Mazzotti’s neighbour was taken by the EFF leader as provocation.

Pauw controversially shared the address of a property Malema’s wife and children are believed to live in, which is reportedly owned by Mazzotti, and borders his own luxury compound in Hyde Park.

The journalist had tweeted a bird’s-eye view of the property from Google Earth, as confirmation of a story on EWN, which reported that the EFF leader’s immediate family was living in a house owned by Mazzotti.

Pauw deleted the tweet after the South African National Editors’ Forum (Sanef) appealed to him to do so, but also defended his decision to share a photo of Malema with his infant son sitting next to Mazzotti, a move that enraged EFF spokesperson Mbuyiseni Ndlozi as well as many of the party’s supporters.

The President’s Keepers author argued that the image had already been freely uploaded by Malema to social media and was in the public domain.

It will never happen

He also clapped back at another user who accused him of being easily angered and asked him if his tweet was “presidential material”.

Malema retweeted two Twitter users whose response towards Pauw featured insults more specific and personal than those tweeted from the EFF leader himself.

WARNING: The tweets below include strong language. 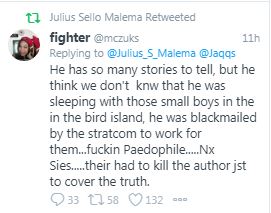