Three SA Super Rugby things to look out for this weekend

It's the battle of two teams whose styles, erm, don't clash and the Stormers aim to turn substitutions into points. Stormers Juarno Augustus runs the ball during the Super Rugby match between New Zealand's Hurricanes and South Africa's Stormers at Westpac Stadium in Wellington on March 23, 2019. (Photo by Grant Down / AFP)

There’s been ample evidence of that already in this year’s Super Rugby campaign – even though the Lions still tell you they don’t play the way the average local franchise does.

What we haven’t seen too much of yet is two sides that are mirror images of each other having a proper go at each other.

When the Sharks and Bulls face off at Kings Park on Saturday, there won’t be any clash of styles.

These are two teams who play tight, counterattacking and risk-free rugby and if the men from Loftus can recover from last weekend’s thrashing at the hands of the Chiefs, this slug fest could be compelling.

Meanwhile, the Stormers – who themselves haven’t been bad playing “anti-rugby” – are looking to expand their horizons against the Blues in Auckland.

Here are three talking points for this weekend’s action.

Historically, South African sides have struggled to match Kiwi teams in terms of intensity in the last 20 minutes of games.

However the steady improvement in local franchises’ conditioning means they’ve become a better in this regard.

Stormers coach Robbie Fleck wasn’t wrong when he said earlier this week that his charges finished the match against the Hurricanes stronger.

“We managed the game well,” he said.

“By the end of the game, we were probably the stronger team. We had an opportunity to win that game.”

With mobile bench in place, the Stormers certainly can repeat last week’s feat … but they need to make sure it’s accompanied by points on the board. 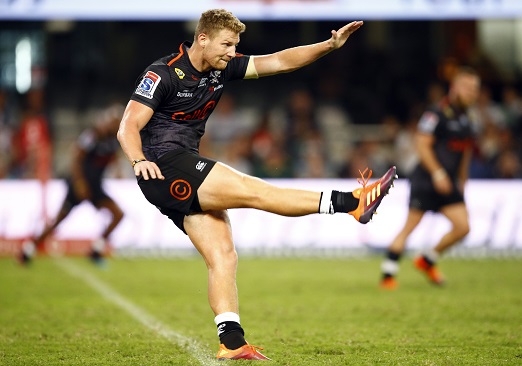 Robert du Preez jr might be off to England at the end of Super Rugby, but to say that his international career is over because of that is premature.

The 25-year-old pivot still very much remains in the Springbok picture.

After all, what happens if Handre Pollard – his direct opponent on Saturday – or Elton Jantjies suffer a long-term injury before the World Cup?

More immediately, he remains a vital cog in the Sharks’ machine and a solid performance in a “Test” of sorts will do him a world of good.

“It’s going to be a match of Test intensity and our exits are going to be important. That includes the kicking, which Rob spearheads. This is a massive opportunity for all the players out there with national interests.”

Home away from home is no guarantee Handre Pollard of the Bulls during the Super Rugby match between Vodacom Bulls and Chiefs at Loftus Versfeld on March 23, 2019 in Pretoria, South Africa. (Photo by Lee Warren/Gallo Images)

To illustrate how the Bulls enjoy going to Durban, one only needs to revisit the events of 30 June 2017.

This was the year of Nollis Marais’ demise as head coach and one of the darkest years in the franchise’s history.

Yet even at this low point, they still managed to go to Durban and beat a Sharks side well in the playoff mix by 30-17.

They were possibly complacent last week, they won’t fall into that trap again.

“We have done it in the past and just have to go and do it again. But it’s not going to just happen because we are fired up because we lost last week,” he said.

“It’s a quality side and there is nobody who stands out, which makes it tricky because you can’t take one guy out for them to lose their shape or attacking ability. They have a whole group of guys who are responsible for everything. It’s going to take a real team effort to win.”