While not the most intriguing of battles, Paul Kamanga demonstrated enough ringcraft to claim his first title belt at the "Hot Shots" box and dine event at Emperors Palace earlier this week. 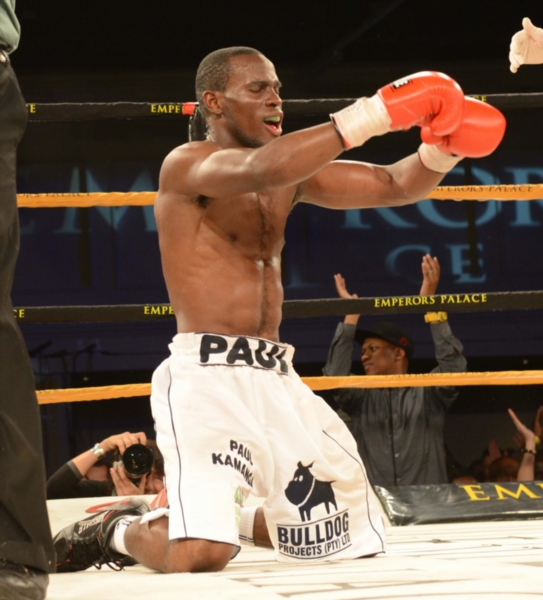 The 20-year-old was matched against the rugged Boitshepo Mandawe and being well aware of the danger that his more experienced opponent posed, Kamanga made sure to stay out of trouble.

The unbeaten junior-welterweight prospect was always going to have a hard time stopping the gritty Mandawe and the fight went the distance with judges scoring a unanimous decision in favour of Kamanga, who also claimed the WBA Pan African strap.

Mandawe’s come-forward style meant that Kamanga had to keep moving to stay out of danger, which he managed to do each time Harold Volbrecht’s charge came at him although there were times when he relied heavily on clinching to get out of the close battles.

Meanwhile on the undercard, there were knockout victories for Chaz Peters and Grant Fourie in their respective bouts with both men needing a single round to see off their opponents.

Fourie landed a big right that sent Thulani Mbatha face-first to the canvas, while Peters had too much power for Masterd Mangaldaza, stopping him in his own corner just under two minutes into their welterweight bout.

Alfonso Tissen kept his current winning streak going when he claimed a unanimous decision over William Bankisi in their middleweight bout. Bankisi was dumped on the canvas in the first and again in the fourth and final round with Tissen taking margins of 39-35, twice, and 40-34.

Meanwhile, Tissen’s stablemate Joey Stiglingh made a winning return after a break of 13 months when he claimed a split-decision win over a very game Raifiwa Maemu in a lightweight contest over six rounds.

Ring rust showed in the early exchanges as Stiglingh struggled to find his rhythm, but he got going and did enough to impress two of the judges, with both scoring 59-55, while the third card was 58-56 in Maemu’s favour.

In the opener, Ricardo Hiriman was handed the first loss of his fledgling career when he was outpointed by Ayanda Nkosi in their featherweight contest over four rounds.