The storm likely washed the little turtles out of the warm current and into colder water. Following a storm in the Durban area, about 10 loggerhead turtle hatclings have stranded on Plettenberg Bay and Knysna beaches over the past week. Photo: Supplied

Small loggerhead turtle hatchlings have been appearing on Plettenberg Bay and Knysna beaches every day over the past week following a storm in the Durban area last week, reports Knysna-Plett Herald.

And it is not only along the Garden Route where these tiny visitors have needed rescuing. Renee Leeuwner from the Two Oceans Aquarium in Cape Town said they had by Monday received 121 hatchlings from across the South African coastline, and expected more to arrive during the course of the week.

Every year between March and May, large numbers of these endangered turtles wash up on various beaches along the South African coast, including the Southern Cape.

The turtles are hatchlings from KwaZulu-Natal, the nearest breeding area, that get caught in strong currents.

They usually swim into the warm Agulhas currents and drift southwards, but often a strong South Easterly wind and rough sea conditions force them into colder Cape waters. They end up beaching along the coastline stunned by the cold, dehydrated and injured.

Those that end up along the Plettenberg Bay and Knysna coast usually end up at the Tenikwa Wildlife Rehabilitation and Awareness Centre, where they are nursed back to health and transported to the Two Oceans Aquarium in Cape Town, where they are further rehabilitated and eventually released back into the wild.

Nature’s Valley Trust director Dr Mark Brown said about 10 of these turtles had ended up on Plett and Knysna beaches over the past few days.

This comes after the massive storm that hit the Durban area last week. The storm, according to experts, likely washed the little turtles out of the warm current and into colder water. They are too small to swim against the wind, waves and current and, in the best case scenario, were unable to reach a beach along the coastline.

The Plett Marine Animal Stranding team urged beachgoers to be on the lookout for these little marine critters. “Please do not walk on by, or attempt to place the turtle back into the water. Please pick it up. Sometimes they can appear to be dead when still alive as their metabolism shuts down completely, but can be revived,” the team said.

“Also, if you happen to come across any deceased ones, it would be greatly appreciated if they could still be given to the stranding network, as postmortems can present really fantastic research that can be used to try and determine what they died from, or if they had ingested any foreign objects such as plastic.”

Once a turtle has been found, they can be placed into a small, well-ventilated box or ice cream tub with a dry towel at the base of the container. Keep the turtle out of direct sunlight, do not wet the turtle and do not attempt to feed it. Immediately phone the stranding hotline to arrange to get it to a network point. 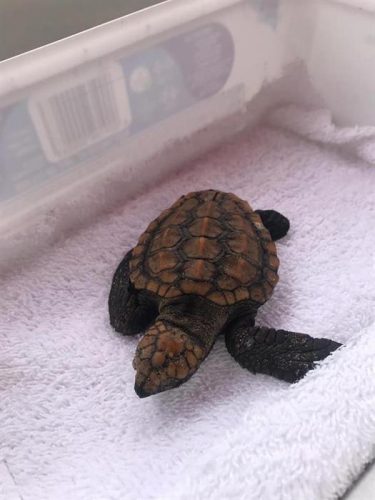 About 10 loggerhead turtle hatchlings have washed up on Plettenberg Bay and Knysna beaches over the past few days. Photo: Orca Foundation

“Once the stranding network has these turtles in their care, we can immediately arrange for lifts for them to get through to the Two Oceans Aquarium in Cape Town, where they need to be rehabilitated and strengthened, before being released back into warmer offshore waters.”

The local stranding hotline number is 0794634837. Alternatively, Chanel Hauvette at Nature’s Valley Trust can be contacted on 0723172280 and the Tenikwa Wildlife Awareness and Rehabilitation Centre on 044 534 8170.