Herschel Jantjies: The Stormers puppy with a nasty bite

The rookie scrumhalf stands only 1.67m tall, but his tackle stats are better than various giants in Super Rugby. 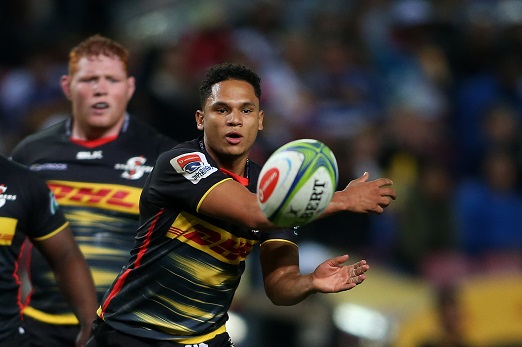 Herschel Jantjies of the Stormers sends the ball wide during the Super Rugby match between DHL Stormers and Crusaders at DHL Newlands Stadium on May 18, 2019 in Cape Town, South Africa. (Photo by Shaun Roy/Gallo Images)

With some exceptions, scrumhalf is a position reserved for Jack Russells, diminutive men with a big heart and possibly bigger bark.

Herschel Jantjies, a midget in rugby terms as 1.67m, wants to add a third string to that bow: bite.

The 23-year-old Stormers halfback has been one of the few revelations of a mediocre SA Super Rugby campaign, regularly showing glimpses of true class and impressing to such an extent that he’s suddenly being touted as an outside bet for Springbok selection at this year’s World Cup.

“I don’t want to be seen as the small guy,” said a confident Jantjies, who only had one replacement appearance in Super Rugby before this season.

“I don’t want to be targeted because then it will be a long 80 minutes on the field. I like to make myself known in the beginning of a match with my first tackle. If I can stop a big guy he is not going to come at me the whole day.”

Before you snigger in your sleeve, consider the stats.

With that small frame, Jantjies has completed 62 tackles and missed just 10.

Four of those tackles have been classified as dominant – thumping, proper hits – and another three have led to turnover possession for the Cape side.

To put that into perspective, that’s only two less than Springbok man-mountain Eben Etzebeth.

“I would say on a mental scale it (defence) has definitely improved as I needed to do that,” said Jantjies.

Yet even though tackling was something he was specifically asked to pay attention to, the young man from Stellenbosch isn’t going to neglect other areas of his game.

“There’s always room for improvement. I can improve my passes and definitely my kicking. But with time and a lot of training that will come,” he said.

“I guess you can say I am an instinctive player. I play what I see. I do like making breaks and I do like trying things on attack and giving the opposition defence something to think about, that is just the way I have always played.”

Jantjies will certainly need to keep that bag of tricks handy this weekend when he comes up against an illustrious opponent, Highlanders and All Blacks talisman Aaron Smith.

Not that he’s giving it too much thought.

“It’s not a personal battle so much as I like to work on my own processes to follow and to focus on myself,” said Jantjies.

“He does sum up the situation really quickly and in that regard is one to follow and I definitely want to do that but there is a long way to go before I can compare myself to Aaron.”