Brink unfazed by battle with the twins

With a Lions loose trio that focuses more on pace and guile, the imposing blindsider will have his work cut out against the Du Preezs. 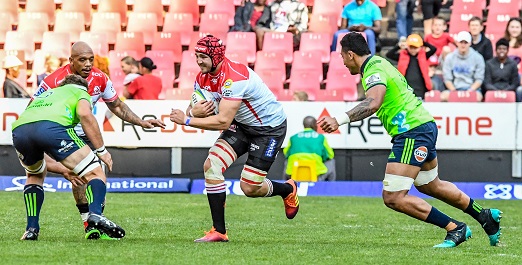 Cyle Brink of the Lions with possession during the Super Rugby match between Emirates Lions and Highlanders at Emirates Airline Park on May 18, 2019 in Johannesburg, South Africa. (Photo by Sydney Seshibedi/Gallo Images)

Brink only recently returned from a long-term knee injury, while the Du Preez siblings have both shown some excellent form.

“They are good players and I always want to test myself against the best players in the whole of Super Rugby.

“It’s not something I worry about. I just worry about my own game and how I play.

Due to his bulky appearance and preference for lifting weights, Brink has been referred to as the enforcer of the side.

“I take a lot of confidence in gym work and doing weights,” he said. “It’s a thing from school days and I wouldn’t say I’m an enforcer, but I like to play a hard game and be physical.

“I don’t think gym work has an impact on how you play and your attitude on the field.

“It’s more of a mentality and everybody has a different box they like to tick.”

Brink and injured Lions captain Warren Whiteley often compare notes because they have both battled with knee injuries.

“I don’t know how similar his injury is to mine. I know it’s in a different place in his knee and obviously affects different things, and mine has settled a bit quicker than his did.”

Earning two-straight wins in an inconsistent season brought a bit of momentum to the Lions side, but Brink was focussed on his own role in the squad.

“My role is the same as last year. It hasn’t really changed and the coaches don’t really put pressure on you by telling you that have to be in this form or that form.”